‘That doesn’t seem to make much sense, does it?’ Justin Thomas debates official 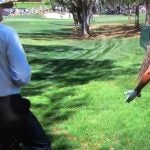 Justin Thomas and rules official Andrew Miller on Saturday on the 1st hole at Innisbrook.

Justin Thomas wasn’t being helped by the rules book, so he turned to the dictionary.

In a 90-second back-and-forth with a rules official during Saturday’s third round of the Valspar Championship, Thomas sought relief from an out-of-bounds fence after his tee shot on the par-5 1st at Innisbrook settled a couple yards to the left of it. Thomas argued to Andrew Miller that the fence was a temporary immovable obstruction, and it led to this colorful exchange, which was picked up by Golf Channel microphones:

“OK, so this isn’t something that — this is usually not here? Or it is here usually?” Thomas said.

“It usually isn’t here, but we deemed it as a boundary fence,” Miller said.

“That doesn’t seem to make much sense, does it?” Thomas said.

“No? All right. Thanks,” Thomas said.

At that point, Miller radioed to Pete Dachisen, another rules official. Should the fence have been deemed a temporary immovable obstruction, Thomas would have unlocked relief options under Model Local Rule F-23. But since the fence was defined as an out-of-bounds boundary for the tournament, he was forced to play his ball as it was. (The USGA website explains it this way: “You do not get free relief from objects that define or mark the course boundary. You may not move objects marking course boundaries or take free relief from them like you would from other artificial objects, like a cart path, a building, or a stake marking a penalty area. Your options are to play your ball as it lies, proceed under penalty of stroke and distance by playing again from the spot of your last stroke (see Rule 18.1), or decide your ball is unplayable (see Rule 19.1).”

On the radio, Dachisen told Miller that the fence was just like the boundary fences used at Bay Hill, host of the Arnold Palmer Invitational at the start of the month.

“If these were stakes here like it is any other round of golf you play, then this is perfectly normal,” Thomas said, “but because this is put here for this golf tournament I feel like it should be something that you should get relief from. I don’t know.”

Denied relief, Thomas hit back out to the fairway. From 97 yards out on his third shot, he hit to 10 feet and birdied the hole.

“I think Justin makes a great point about the temporary concept,” analyst Notah Begay said on the Golf Channel broadcast. “You see the same operations setup at Bay Hill around the range, where that is deemed a boundary fence. Mostly comes into play left of the 9th hole there.

“Unfortunate break there for JT. Maybe he was going to try and do something a little different.”