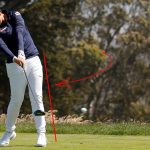 Too much of anything — even a good thing — is a bad thing. It’s true in life, and it’s true in the golf swing.

The first example of this is the ongoing comparisons between Yuka Saso and Rory McIlroy’s golf swing. Yeah, sure, they look quite alike. Not as alike as Adam Scott and 2000 Tiger Woods golf swings, but they’re similar, the same way lots of different golf swings are really similar.

Fast-forward a few weeks and add in one U.S. Open trophy, and the lure of a catchy idea that a clone of McIlroy’s golf swing (impossible to tell them apart!) just won her first major was too great. It’s become one of those things that people just say so, without even looking for themselves.

Yes, I’m aware I may be the only person who is bothered by this, but I am bothered by this, and it’s my column, so today I’m going to highlight one specific way in which Yuka’s move is actually its own brand of awesome — and what you can learn from it.

First, back to the theme of the column: Too much of anything is a bad thing. In the golf swing, golfers know by now that they have to shift their weight onto their back leg on the backswing, and their front leg on the downswing. The problem is they often overcook the idea. Rather than the weight shift being a subtle move, they end up swaying and sliding. They move way too far to their back foot on the backswing, and as GOLFTEC discovered via its study, either not enough or too much on the downswing. It leads to chunked iron shots and all sorts of other issues.

Saso does not do this, and neither do the other great swings in golf history. For you, it translates into a simple swing thought:

Golf teacher Lucas Wald wrote about this well in a recent issue of GOLF Magazine (you can read his article right here), but in a nutshell, he explains that the worst thing about sliding is that it limits your ability to rotate, which slows your swing down.

“Just as in the backswing, sliding too much on the downswing limits your ability to rotate through the ball and create enough clubhead speed. If you look at long drivers throughout history, such as Sam Snead, Justin Thomas or Bubba Watson, you’ll see how their front hip remains well inside their front foot as they swing through impact. If you slide and move your front hip over or outside your front foot, your turn will stall — and your swing speed will plummet.“

The feeling, Wald goes on to say, is that your lead hip is always “internally rotating,” staying inside your lead foot and sending your body move up and back. Draw a line along the thigh, and it should be pointing away from the target, like you see below.

And this is what Yuka does so well in her swing: She keeps her turn centered throughout, rotates her lower body hard, then pushes up against the ground. Her body is always tilting away from the target — which helps her hit up on the ball — and her lead hip always stays inside her lead foot, like many golf greats.

It’s also, if you forgive me for belaboring the point, one of the ways Saso and McIlroy’s golf swings are not identical. Just look at how different their lower body actions are here:

In any case, congratulations, Yuka, for a golf swing we all wish we had, and for giving us a swing thought we can use as we try.

Need more help with your driver? Get a fitting from the experts at our affiliate company, True Spec Golf.