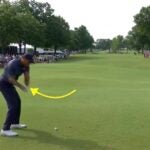 When he's struggling physically, Tiger's lower body spins out and leaves his arms behind him.

TULSA, Okla. — The signs start small, but they’re there. And the nature of covering Tiger Woods in 2022, still in the midst of his comeback from a near-fatal car crash, means you can never stop looking for them.

It happened again on the 8th hole, his 17th, and this time the issue was revealed. Another clanked shot low, short and right, but this time, he stumbled back onto his back foot, wincing.

“I just can’t load it,” he said of his leg. “Loading hurts, pressing off it hurts, and walking hurts, and twisting hurts. It’s just golf. If I don’t do that, then I’m all right.”

The issue, as Tiger explains briefly there, is that when his body starts locking down, it negatively affects his ability to load on the backswing, which throws off the timing of his downswing. Loading his trail hip on the backswing is a big key for Tiger (and it’s the main reason why he’s stopped wearing Nike shoes).

When he’s struggling with injury or tightness, he can’t do that. And when he can’t load properly on the backswing, his hips spin out too early on the downswing, and his body moves toward the ball. It leaves his arms stuck behind him on the way through, racing to catch up. That leaves the clubface open, what causes his pushed shots out right. The results aren’t pretty — and often painful.

Though the different camera angles aren’t ideal, you can still see the general differences between Tiger’s good and healthy swings from his other shots. On the left, he’s more into the shot. There’s shape to his body, with flex in his legs and his shoulders more level and closed to the target — a sign he’s turning in-sync. In the right frame, Tiger’s standing slightly more vertically, and his left shoulder is higher than his right. There, his lower body has already released, but his upper body his hanging back because it still needs to hit the ball.

The differences are very slight to the naked eye, but there are a few tell-tale signs:

It’s a small slice of a new reality for Woods, and managing his body is something he’s spoken about needing to account for in his strategy.