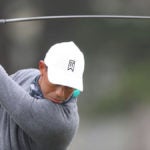 Tiger Woods plays a shot during a practice round prior to the 2020 PGA Championship.

Players get asked about all kinds of stuff during press conferences, especially during majors. But the nervous, competitive tension is heightened during the biggest events of the season, so information that players usually share freely is kept under wraps.

Such was the case for Tiger Woods during his pre-PGA Championship press conference.

Tiger didn’t have the best of showings during his one and only start since the Tour returned. He barely made the cut, finished T40 overall, and ended 40th, 61st and 56th in SG: Driving, Around The Green and Putting, respectively (though his 5th SG: Approach performance was encouraging). His swing speed didn’t seem to hit the same heights as during previous seasons, and his putting at times looked suspect.

But if those sound like reasons to fade Tiger this week, then think again. Tiger’s coming into the year’s first major more confident than ever — “of course,” he said with a smirk when asked if he could win this week — thanks, in part, to some changes he’s been making to his game.

“The results that I’ve seen at home, I’m very enthusiastic about some of the changes I’ve made.”

Could you expand on that?

Rest assured, I’ll be keeping my eyes peeled for clues throughout the week, but one thing Tiger might be referring to was a putter change. Spotted by GOLF’s own Jonathan Wall, Tiger is testing out a flatstick that he tried at the Open last year.

As for those swing keys, we’ll go full golf nerd on this and report back.

Butch Harmon: These are the kind of players golfers should copy

The homemade training aid Louis Oosthuizen is using at the U.S. Open