Tiger Woods had this 1 thought over high-pressure Masters putts 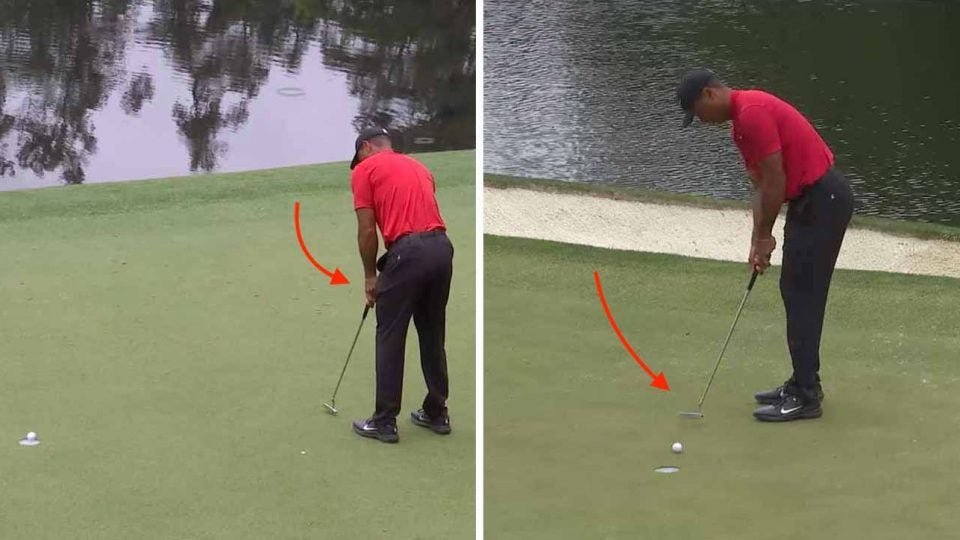 By releasing his putter head with his right hand, Tiger Woods ensures that he squares it at impact.

As a golf fan, I’m excited any time we get the opportunity to dive inside Tiger Woods’ on-course thought process. That was the best part of watching Woods and Jim Nantz go back and forth during Sunday’s rebroadcast of the 2019 Masters (until the end, when Woods talked about the meaning of his emotional family celebration — that was even better).

During the on-course action, my favorite insight may also have been his simplest explanation: what he was thinking about over big putts.

Any golfer knows that it’s easy to think toxic thoughts over important putts. And for most of us “important” might mean the price of a buddy’s beer, while for Woods it meant the difference between another near-miss and his fifth green jacket.

Woods explained that two putts were especially huge during the final round. They were both shorties and both felt like must-makes. The first came at the pivotal No. 12.

You’ll recall that Francesco Molinari was leading by two on the tee — until he found the water and Woods landed safely on the green, albeit some 50 feet from the hole. In just two swings, the balance of the tournament had shifted completely.

It’s wild, the way Woods’ mind works at Augusta. He has such a rich mental library of shots he’s played over the years that he can tap into every time. He’d played his conservative Sunday line off the tee, which meant playing a shot over the left tongue of the front bunker. He’d executed that to perfection, but now faced an intimidating two-putt.

“I actually had a similar putt in ’97 and I lagged it up there stone dead,” Woods said of his lengthy first effort. “But this time I did not.”

Woods left this effort some 7 feet short. Meanwhile, Molinari had played his third shot to some 10 feet. Suddenly, Woods’ dream of a two-shot swing was in serious jeopardy. He was at the risk of picking up even one shot.

But then Molinari missed, making easily his worst stroke of the day as his ball slipped low and right of the hole. Now it was Woods’ turn, with the chance to tie the lead heading to the course’s final third.

Bang! Sure enough, Woods hit the sliding left-to-righter with just enough conviction that it fell into the hole. The tournament was tied. 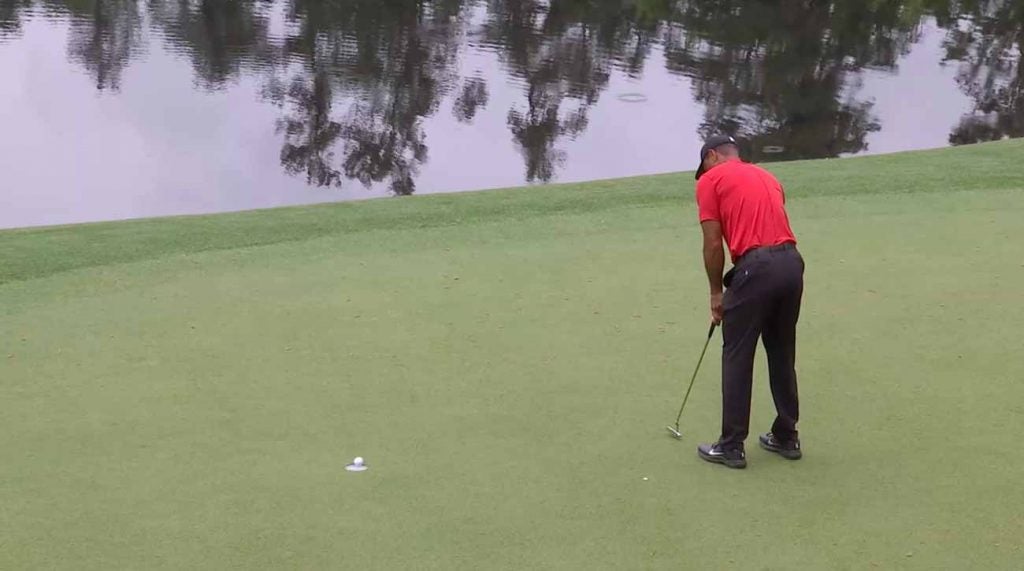 That putt on No. 12 stayed up — barely — and Woods was suddenly tied for the lead.

The next putt Woods discussed was an interesting one because it looked so simple on the telecast, but he said it made him particularly nervous: a three-footer for birdie at 16.

“I was a bit nervous about this putt,” Woods admitted to Nantz as CBS showed him surveying the shortie. Even though he said he knew it was “left-center, all day long,” he called in caddie Joe LaCava to consult on the read. “He looked at me like, ‘What the hell are you doing?’”

In describing his thought process as he stood over the putt, Woods revealed something similar to No. 12.

Bang! Birdie. Two-shot lead. He’d all but sealed the Masters. 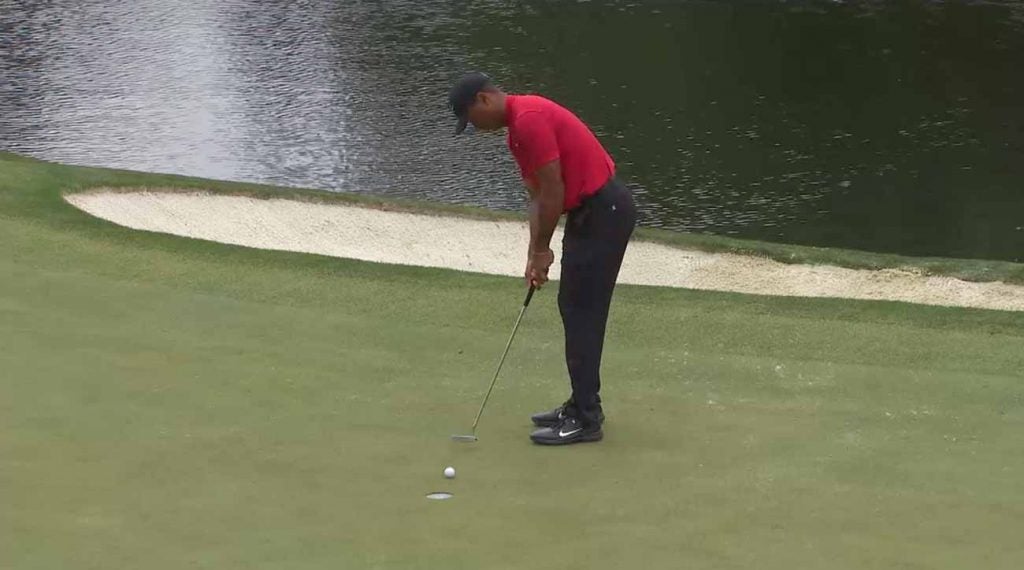 Even on a short putt, Woods' putter has released, promoting an aggressive stroke through the ball.

What does this mean, exactly, this talk of right hands and releasing? Well, from a data-driven breakdown of Woods’ putting stroke, we know that he starts with his putter slightly open at address — 2.5 degrees, to be precise. That means he has to close the face at impact, and over the years he has done that about as well as anyone. At impact, that face is dead square nearly every time.

That’s why Woods focuses so much on his right hand. The “hit” in his putting stroke comes from that right hand helping to get the putter face from slightly open to dead square. It’s why you’ll see Woods warm up on the putting green with just his right hand before every round he plays.

Every putting stroke is different, of course, so me thinking about “right hand” won’t necessarily help me putt better. But there are two reasons it’s effective:

1. It’s simple. Woods has figured out that there is one key feeling that helps him groove that perfect putting stroke. He’s not juggling a million different thoughts in his head as he stands over the ball. He’s boiled it down to this one effective thing.

2. It’s proactive. Because it’s easy to get tentative over important putts, it’s important to think of a positive action you can take. Rather than thinking, “please don’t push this, you idiot!” Woods is telling himself, “use that right hand!” When we talk about his mental toughness, that’s generally what we mean. He’s putting himself in the best possible position to make a good stroke.

The one putt that nobody talks about is the one that would terrify average golfers the most: his tap-in on 18. It can’t be more than 18 inches, but the gravity of the situation would make it completely missable for just about anyone. For Woods, it was no problem — likely because he kept his focused on one thing: that right hand.

Then it was on to the celebration. 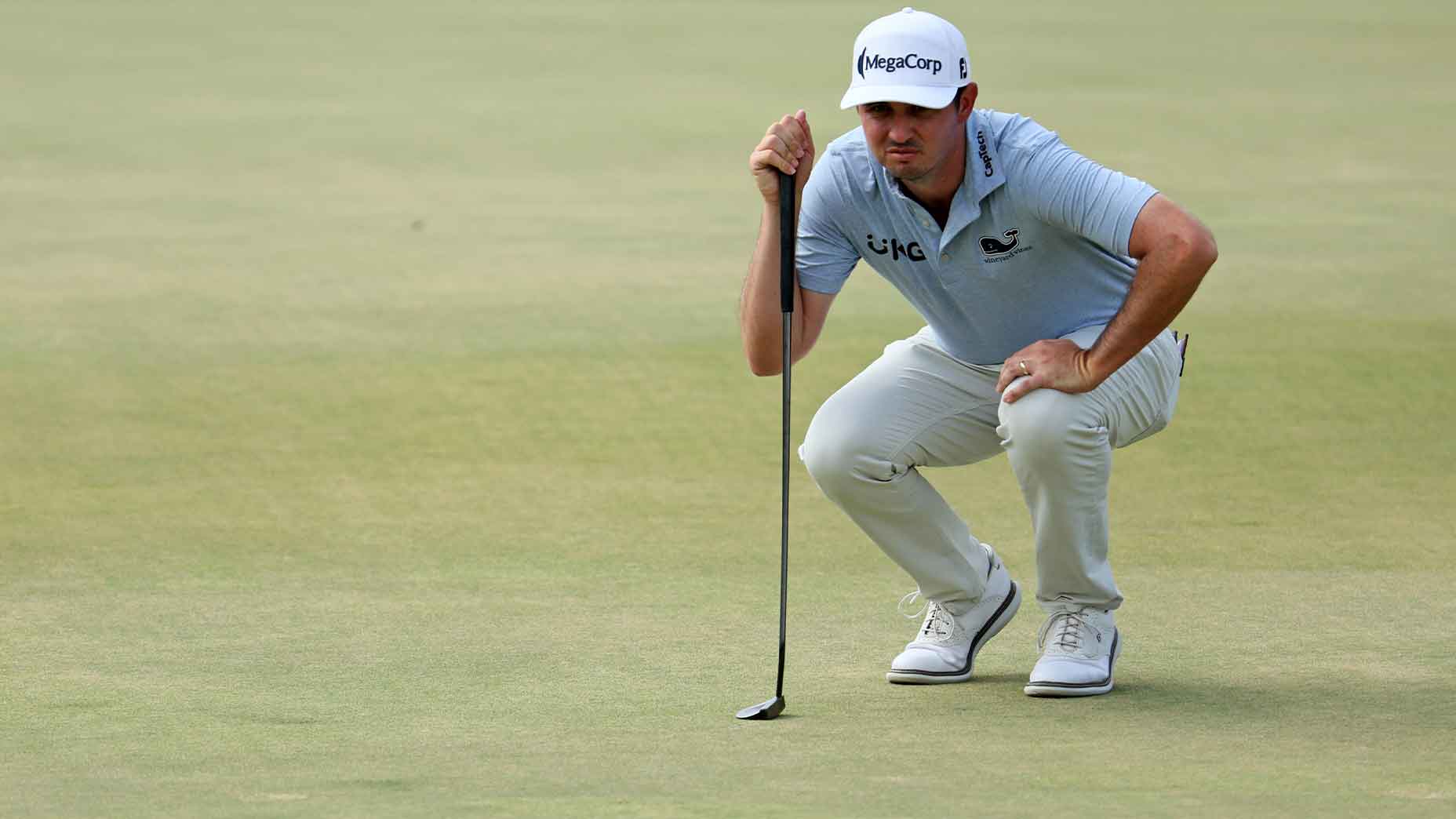 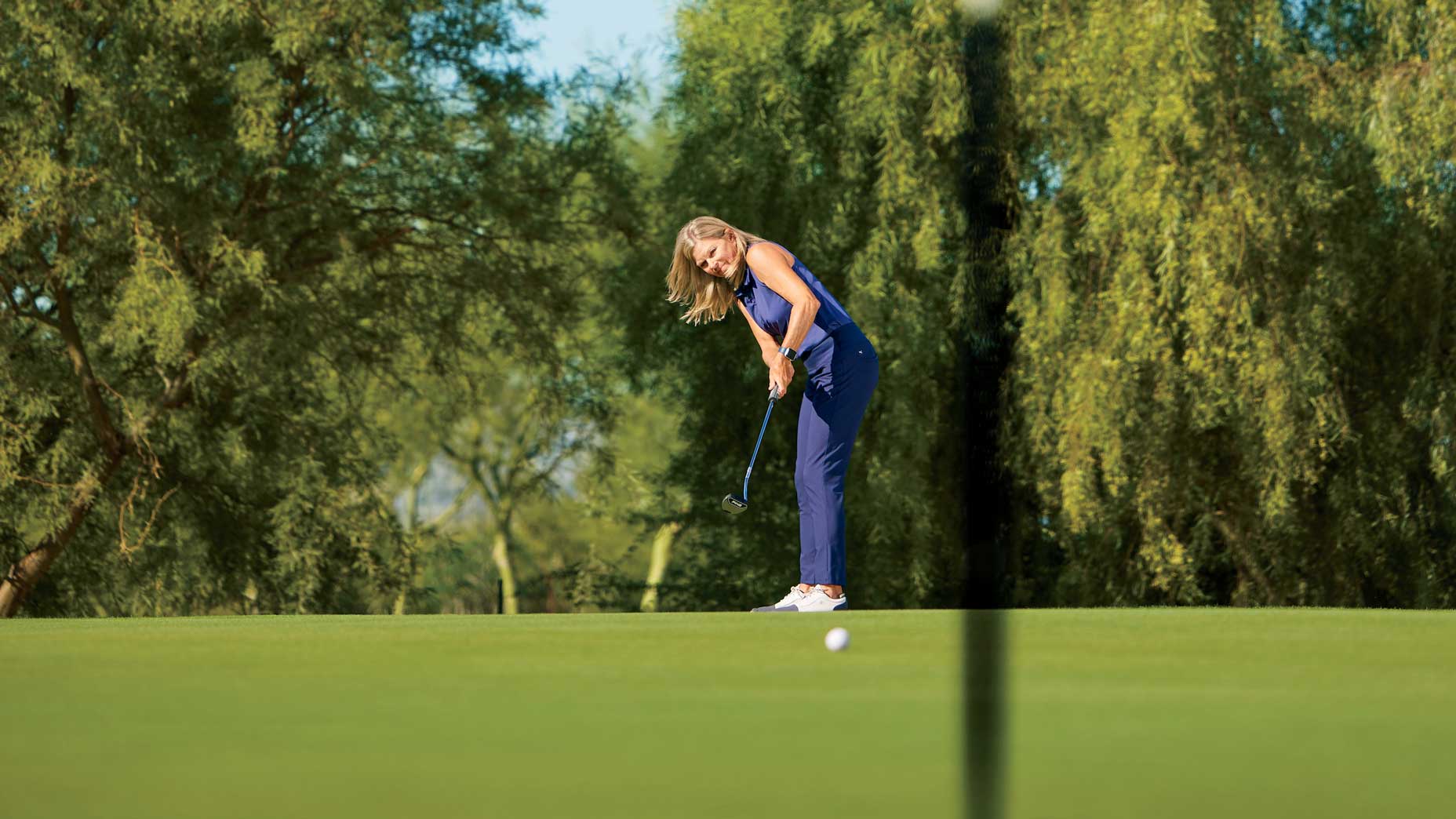 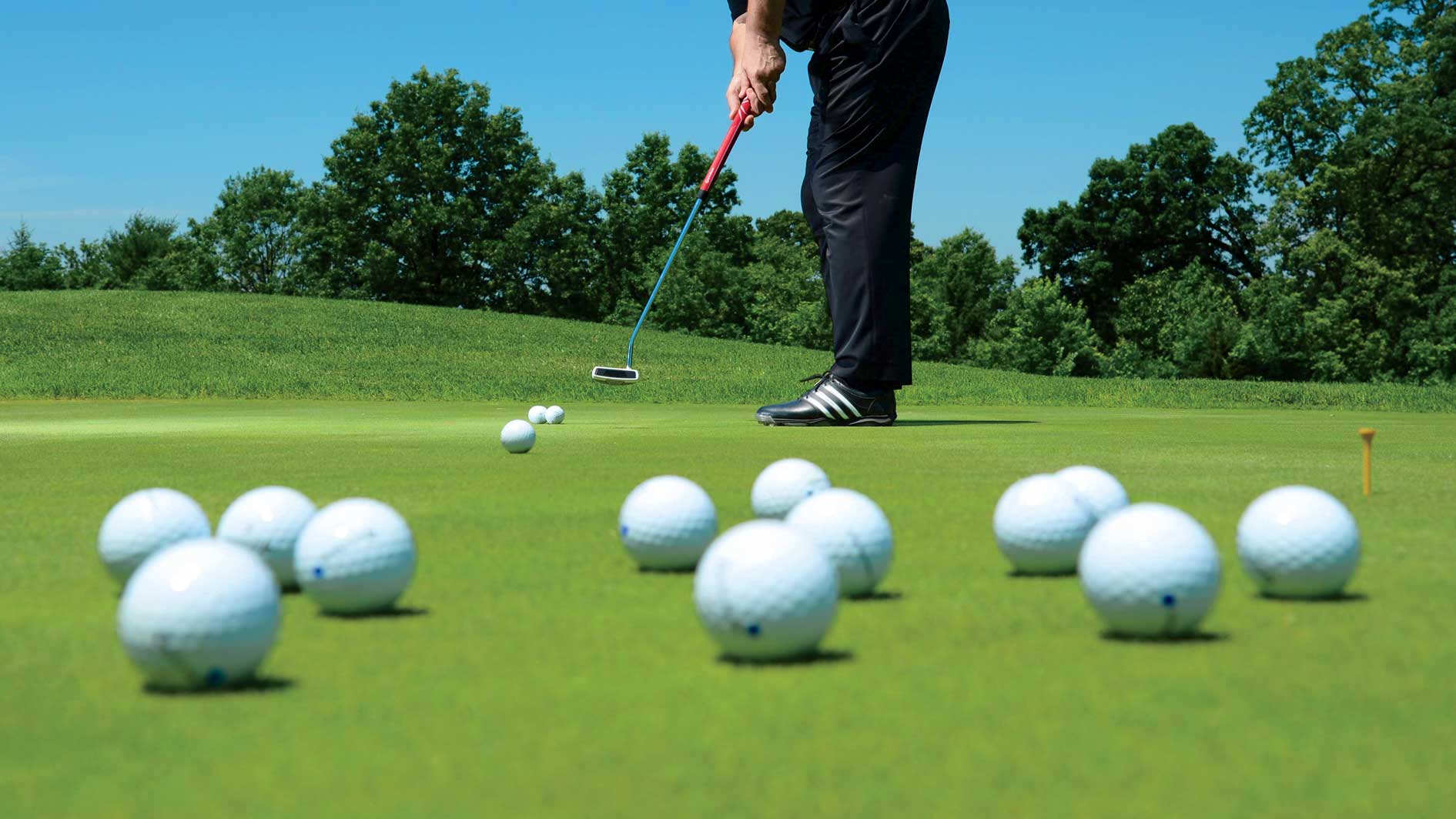