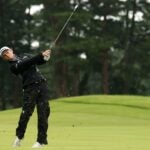 Will Zalatoris is one of the best ball strikers on the PGA Tour, and he says it's smart to start slow when making swing changes.

Will Zalatoris looked at home on the PGA Tour before he had technically even arrived.

A pandemic-era loophole meant he played the 2021 season as a nonmember, despite finishing second at the Masters and bagging more than $3.4 million. The key was his ball striking.

His tip to help yours? Simple.

“Whenever I’m working on something — a position or move — I rarely ever do it full speed at first,” he says. “Slow-motion work is something my dad drilled into me growing up. It helps me with my body awareness and matching stuff up.”

Heed his advice, and you can hit the ball like one of the best in the world.