With these tips, you can drop 10 strokes in no time.

Never miss another fairway! Drain every … single … putt! If I had a nickel for every headline that promised to remake me as a golfer in an eyeblink, I’d have enough spare change for a Pebble Beach vacation.

Wouldn’t that be nice?

Don’t get me wrong. I’m not opposed to miracle fixes. I’m sure they even happen. Just not very often. That’s not how golf, or life, tends to work.

At Columbia Business School, where I teach, I often tell my students that I don’t care about their grades. But I do hope that they know more at the end of the semester than they did when we started. In my view, success is about making progress, which doesn’t often happen by dramatic leaps and bounds. More frequently it comes through incremental gains, adding up over time to marked improvement. That’s true in the classroom and on the golf course.

You can’t snap your fingers and suddenly start shooting the best rounds of your life. But you can work steadily toward lower scores by getting a better understanding of your game and goals, and focusing your practice accordingly. Improvement comes by setting realistic expectations, then devising a plan to help you reach them.

Suppose you’re a 90-shooter and your goal is to cut five to 10 strokes off your score. By comparing your play to that of an 80-shooter, you can start to see where the biggest differences lie and figure out your clearest path to improvement. Looking at the data, an important truth quickly becomes plain: It’s a lot easier to save strokes by reducing your double bogeys than it is by increasing your birdies.

To understand what causes snowmen on your scorecard, you need to focus on those individual shots. Blow-up holes can happen because of a single awful shot (a tee shot that sails out-of-bounds) or an accumulation of two or more below-average shots (picture a missed green followed by a chip to 25 feet and a missed five-footer for a double).

We’d all love to drive, pitch and putt like pros. If we could figure that out, we’d be playing on Tour. A more realistic goal is to minimize your most painful mistakes. Golfers who card 90 lose an average of more than nine shots per round due to awful shots compared to just under five for 80-golfers. A 90-golfer is never going to eliminate every score-killing skull and chunk, but there’s no reason that that same player can’t reduce their awful shots to the rate of an 80-golfer, trimming an average of 4.5 strokes off their score in the process.

The other 5.5 strokes of the 10-stroke difference between 90- and 80-golfers come mainly from shrinking shot patterns—that is, slightly straighter drives, closer proximity on approach and shortgame shots and lag putts knocked closer to the hole.

Big improvements in scores come from reducing, but not eliminating, the number of awful shots and hitting marginally better shots with all clubs in the bag. With that in mind, let’s look at the differences between 90- and 80-golfers in each of the four main shot categories: driving, approach shots, short game and putting. Changing your strategy in one area will be a boon to your scores. Changing it in all four? Boom! 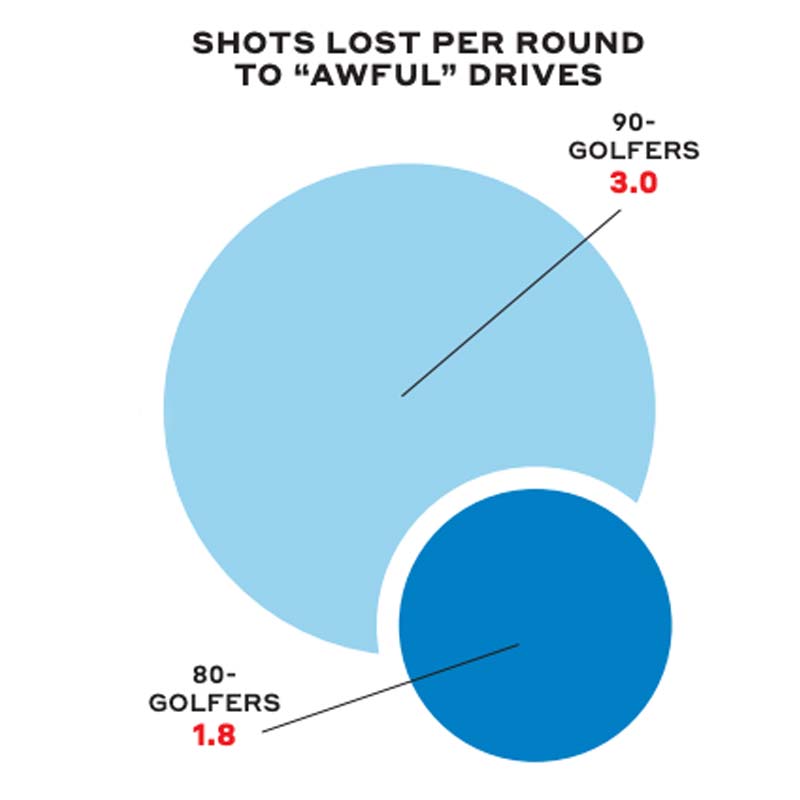 My research shows that 90-golfers lose an average of three shots a round due to “awful” drives where 80-golfers lose 1.8. (For Tour pros, that number shrinks to 0.3.) Drives hit out-of-bounds or into stroke-and-distance hazards are huge score killers. (FYI, a stroke-and-distance penalty represents a strokes gained of –2.) Most weekend golfers figure that slicing a ball OB is an unfortunate but inevitable result of poor technique. Not true! Almost every hole with a hazard has a safer route on the other side. And you don’t necessarily need to change your swing to find it. You can simply change your strategy.

Imagine hitting 50 drives on a hole with a hazard on the right. The resting position of those 50 balls creates what we call your shot pattern. Now picture the center of that shot pattern and shift it away from the hazard so that none of the balls in the pattern is in the penalty area. Your new center point might have to shift so far away from the hazard that it’s now in the left rough. That’s okay. What matters here is the distance between the center of your new shot pattern and the center of your old shot pattern.
That’s how much you need to adjust your aim to accommodate your misses. Making that simple change should ensure that fewer than 2 percent of your tee shots result in a penalty.

Even if you’re a 90-shooter with a 30-yard slice, you should be able to virtually eliminate those score-killing penalties simply by adopting a proper strategy. Any golfer with a brain knows that a second shot from the rough is better than a third shot from the tee box.

That’s an instant fix. In the longer term, of course, we can all benefit from other changes that result in greater distance and fewer shots in the hay. 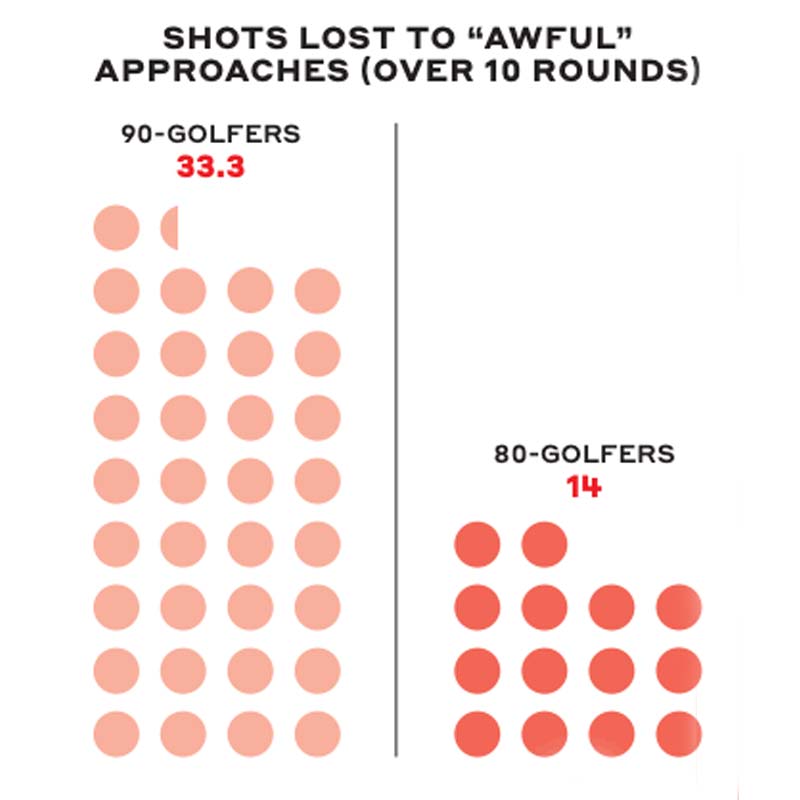 People often say that to shoot lower scores, amateurs just need to put their tee shots in play and get good with the wedge and putter. Of course, there’s nothing wrong with hitting straighter drives and dialing in your short game. But all shot categories matter, and when it comes to saving shots, neither of those categories is the one that matters most. That honor belongs to approach shots, which are typically the biggest contributor to scoring differences between better and worse players, whether professional or amateur. Approach shots matter so much because there are a lot of them (opportunities!) and there are big skill differences (execution!).

Hitting about 24 approach shots (those starting outside 100 yards, excluding tee shots on par-4 and par-5 holes) per round, 90-golfers don’t execute those shots nearly as well as 80-golfers do. Where 90-golfers lose an average of 3.3 shots a round due to “awful” approaches, 80-golfers lose only 1.4. That means 90-golfers could gain nearly two strokes per round hitting clunkers (fatted, skulled, shanked, topped, etc.) at an 80-golfer rate. Fix the clunkers first!

Next, it’s crucial to reduce the size of your approach-shot pattern. From 150 yards in the fairway, 90-golfers hit half of their shots within 56 feet of the hole compared to 42 feet for 80-golfers (and 23 feet for pros). Those huge differences in execution, combined with the large number of opportunities, explain the critical importance of shrinking your approach-shot pattern. One easy fix is to choose the right club: Weekend golfers underclub so much that the middle of their shot pattern is short of the green.

Whenever you have a shot from the fairway or tee between 125 and 175 yards, write on your scorecard the distance to the hole after the shot. Track these finishing distances over a round or two and then sort from smallest to largest. Use the middle of your list of finishing distances as a “median proximity” baseline. The goal: Reduce that median by five or even 10 feet by the end of the season. 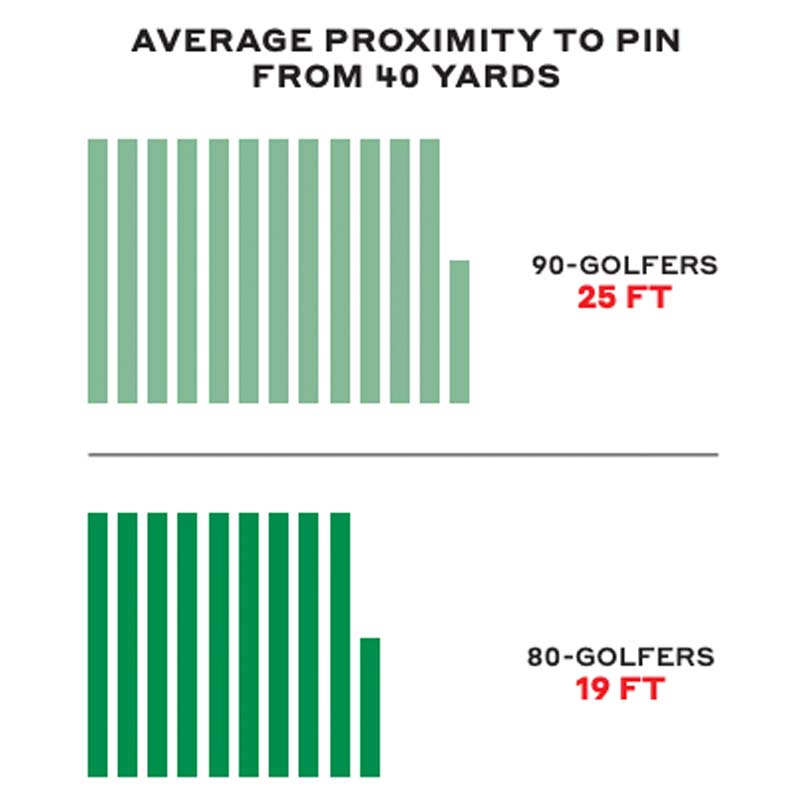 Improve From 60 Yards and In

You might have some version of the following argument: 90-golfers average four to five greens in regulation per round, leaving 13 to 14 up-and-down opportunities. Therefore, improving your up-and-down rate could easily shave 10 strokes off your score. Rubbish! Among the flaws in that reasoning is this: Many missed greens by recreational players are from outside 100 yards, hardly up-and-down opportunities. From those same distances, even pros save par less than 20 percent of the time. To set realistic expectations, a data-driven analysis is in order.

Why focus on zero to 60 yards instead of 60 to 100 yards? Opportunity: 90-golfers have just three shots per round from 60 to 100 yards compared to 13 off-green shots per round inside 60 yards. From inside of 60 yards, make sure your practice includes plenty of time in the rough and sand. Over the course of an average round, 90-golfers have 10 shots from the rough and sand from inside 60 yards, and only three shots from the fairway. When you practice, don’t just try to hone your 60-, 70-, 80-, and 90-yard distances off a mat.

Achieving these gains requires 1) reducing your awful shots, and 2) improving your proximity. From inside of 60 yards, your first goal should be to put the ball on the green in one shot! Ninety-golfers average two awful short-game shots per round (think chunked chips or shots left in the sand.) Reducing this to the 80-golfer level of one per round would save a stroke per round. To illustrate the importance of improved proximity, consider a shot from 40 yards in the rough: 90-golfers hit half of these shots within 25 feet of the hole, while 80-golfers knock half of them to 19 feet. The 25-footer that becomes a 19-footer doesn’t contribute much to score decreases, but the 10-footer that becomes a four-footer does. Those incremental gains really add up! 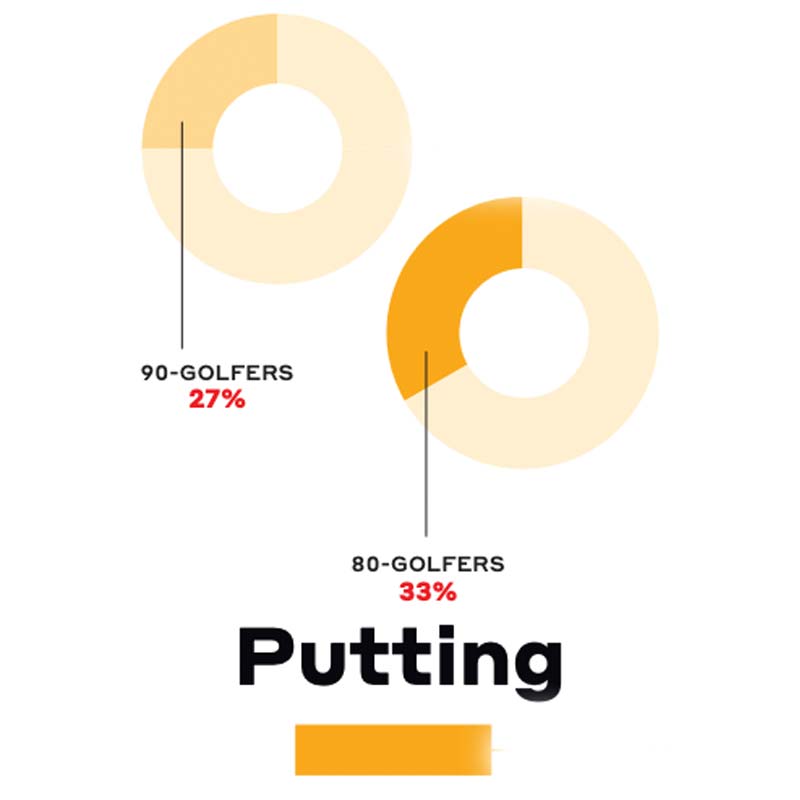 Focus on Those Critical 3- to 10-footers

Three-putts are score killers. But simply counting three-putts won’t tell you whether the culprit was more often a poor first putt or a poor second putt.

It takes a deeper dive into the data to see what sort of practice will benefit you most. Better putters typically gain more strokes by holing more short putts from three to 10 feet than by lagging it closer to the hole from outside 20 feet. Why? Again, it comes down to opportunity and execution. Opportunity: 90-golfers average 10 putts per round from three to 10 feet. Execution: From eight feet, 90-golfers one-putt about 27 percent of the time. From that same distance, 80-golfers make 33 percent of their putts, a 6 percent difference. (Pros punch in at 50 percent.)That might not sound like a lot, but repeated over 10 putts per round, a 6 percent incremental improvement represents a saving of 0.6 strokes per round. That gain is 50 percent more than the 0.4 strokes per round 80-golfers gain on 90-golfers from putting outside 20 feet (even though it’s a much larger distance range).

Lag putting also matters, and here’s a comparison to hammer home the point. From 40 feet, 90-golfers hit half their putts within four feet of the hole while 80-golfers hit half within three feet. To turn this into a game on the putting green, hit 10 putts ranging from 30 to 50 feet to different holes, with some putts uphill, some downhill and some sidehill. Award one point for each putt that finishes within three feet. Your goal is to score five or more points in the game. That means you’re lag putting like an 80-shooter.
There are many ways to lower your scores. It makes sense to start with realistic expectations, then focus your efforts on areas with the most potential for gain. Make it a priority to minimize penalizing misses, such as drives knocked into hazards and botched approach and short-game shots. Most players would benefit from spending more time working on putts in the three- to 10-foot range, though not to the exclusion of medium and long putts. Similarly, your time will be better spent practicing from the rough and bunkers close to the green. That said, the biggest gains are possible by tightening your shot pattern on approach shots, especially those from 100 to 175 yards. Create a plan and stick with it. The improvements you make might be modest and incremental, but watch as they add up over time to lower numbers on the scorecard and more fun on the course.