6 things I learned while playing golf with a major champion 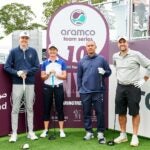 The author, far left, soaked up as much knowledge as he could playing with major winner Catriona Matthew.

OLD WESTBURY, N.Y. — Firsts are always sweet in golf: first birdie, first sub-80 round, first hole-in-one (if you’re lucky!). On Wednesday, I notched a first of my own: first pro-am. After working in golf for several years, I’ve been around more pro-ams than I can count, but at this week’s Aramco Team Series, I finally got the chance to be a part of one.

Getting a chance to play a course like Glen Oaks Club was a real treat, but to make things even better, the pro for our group was two-time winning Solheim Cup captain Catriona Matthew. On top of her sterling Solheim Cup record, Matthew has also has a Women’s British Open title to her name. It’s not every day you get to play with a major champion.

Throughout the day, I tried to ask Matthew as many questions as I could to soak up knowledge from a legend. Here are 6 things I learned.

1. Take trouble out of play

On a water-lined par-5 early in the round, Matthew decided to lay up to 100 yards and hit a wedge from there. I found this to be a curious decision considering she had the length to reach the green, or at the very least leave herself with a short pitch into the green. Her explanation was simple.

“I didn’t want to go in the water,” Matthew said. “I probably could get it there, but when I lay it up, I know I’m not going to make a big number.”

Sometimes laying up is the right call.

2. Aim for the middle of the green

When pins are tucked, pros rarely go flag-hunting, and Matthew is no exception. She calculated each shot into the green to leave herself the best possible look at birdie while never going anywhere near trouble. Matthew played a boring round of golf — and I say that in the most complimentary way. Stress-free golf is good golf.

Matthew got herself into only one spot of trouble all day with a hooked drive into the rough, but just as quick as she got into a pinch, she got out of it. While most recreational players will try hero shots from trouble, that isn’t always the case for pros. Matthew simple knocked her ball back into the fairway, hit wedge on the green and made sure the worst score she could card was bogey. Golf is a game of managing misses, and the pros do that at a high level.

4. Don’t be afraid to carry hybrids

Long irons are in many players bags, but few can actually hit them. In the pro ranks though, optics are of no concern — they carry the clubs that will allow them to score the best. Matthew was a prime example of this; the longest iron in her bag is a 5-iron. If a major winner only goes up to 5-iron, should you really be trying to hit a 3-iron? Probably not. Don’t be afraid to sub in some hybrids.

One of Matthew’s best moves of the Solheim Cup was playing Leona Maguire in all five sessions, riding the rookie to a perfect 5-0-0 record. And with five-plus hours of access to the genius behind the decision, I had to know why she trusted the rookie on such a big stage.

“She’s a rock-solid putter,” Matthew said. “And that’s what you need in that setting.”

Matthew told me that on Day 2 after Maguire won her third match in a row to open the event, she knew she’d play her in all five sessions. The move paid off, and Maguire will go down in Solheim Cup lore. Perhaps Matthew’s decision should, too.

6. These girls are good

The PGA Tour had a slogan when I was growing up: “These guys are good.” I’m of the opinion the LPGA should adopt a similar one. I got to witness world-class talent up close for an afternoon, and it served as a great reminder of how wide the chasm is between pros and mere mortals. These girls are very good.