Aramco Team Series: Everything to know about the new team tournament 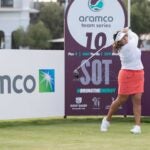 Lizette Salas is among the players committed t compete in the Aramco Team Series - New York.

Professional golf is headed to the Northeast this fall for the Ladies European Tour’s Aramco Team Series – New York, and with it will come some of the top golfers in the world.

Nelly Korda headlines the field for the event, scheduled to be played Oct. 14-16 at Glen Oaks Club in suburban New York City, and her sister Jessica is also competing. In all, five of the top 20 golfers in the Rolex Ranking will make an appearance in the event.

“The Solheim Cup was just the perfect example of how fans and players love team golf,” Korda said. “When I knew the Aramco Team Series was coming across, it was a tournament I just didn’t want to miss, so am thrilled to have it in my schedule.”

The series is the first team event series on any professional golf tour and features an “NFL-style” draft to determine the makeup of the four-player teams. The event also features competing amateurs as each team takes the score of an am which counts toward the team scores. Professionals also compete for a $200,000 purse for the leading individual scores over the weekend.

“It’s a brilliant format,” Nordqvist said. “So fun and so different to really anything else we play on Tour.”

The Armaco Series – New York is the third of four tournaments in the series, with the first two taking place in London, England and Sotogrande, Spain earlier in the summer. Marianne Skarpnord claimed the individual title in London while Alison Lee earned her first professional victory in Sotogrande.

Tickets for the event can be secured for free here.