These are the 6 keys to Rory McIlroy’s effortless swing 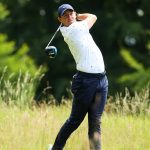 Rory McIlroy remains one of the most impressive drivers of the ball in the game today.

I first met Rory McIlroy at the Titleist Performance Institute when he was just 18 years old. My friend Padraig Harrington warned me: “This kid’s going to change the world.” He was right. My first impression watching Rory’s swing was his effortless power. After testing him using 3D, we found that he had the fastest hips we’d ever seen. But it was the source of his hip speed that fascinated me.

Rory unwinds his hips extremely late in his downswing, because of the immense force he puts into the ground with his legs as he starts down. This generates a ton of clubhead speed, especially for a guy Rory’s size (five foot nine inches, 160 pounds).

He was hitting balls in shorts and a T-shirt. I remember filming him on the range, flat on the ground directly in front of him on his target line. From this vantage point, I saw just how forcefully he was pushing his front foot into the ground. It was amazing — a perfect downswing sequence employing max ground forces.

You may think of this move as “new school,” but if you look back at Jack Nicklaus, you’ll find the old-school equivalent of how to leverage the ground for speed and power. Jack did it by lifting his left heel on his backswing. See how many times you spot this move on the current PGA Tour. You’ll be surprised.

Pound for pound, Rory’s become the longest hitter of the modern era. Check the sequence below for even more insight on how he’s done it. 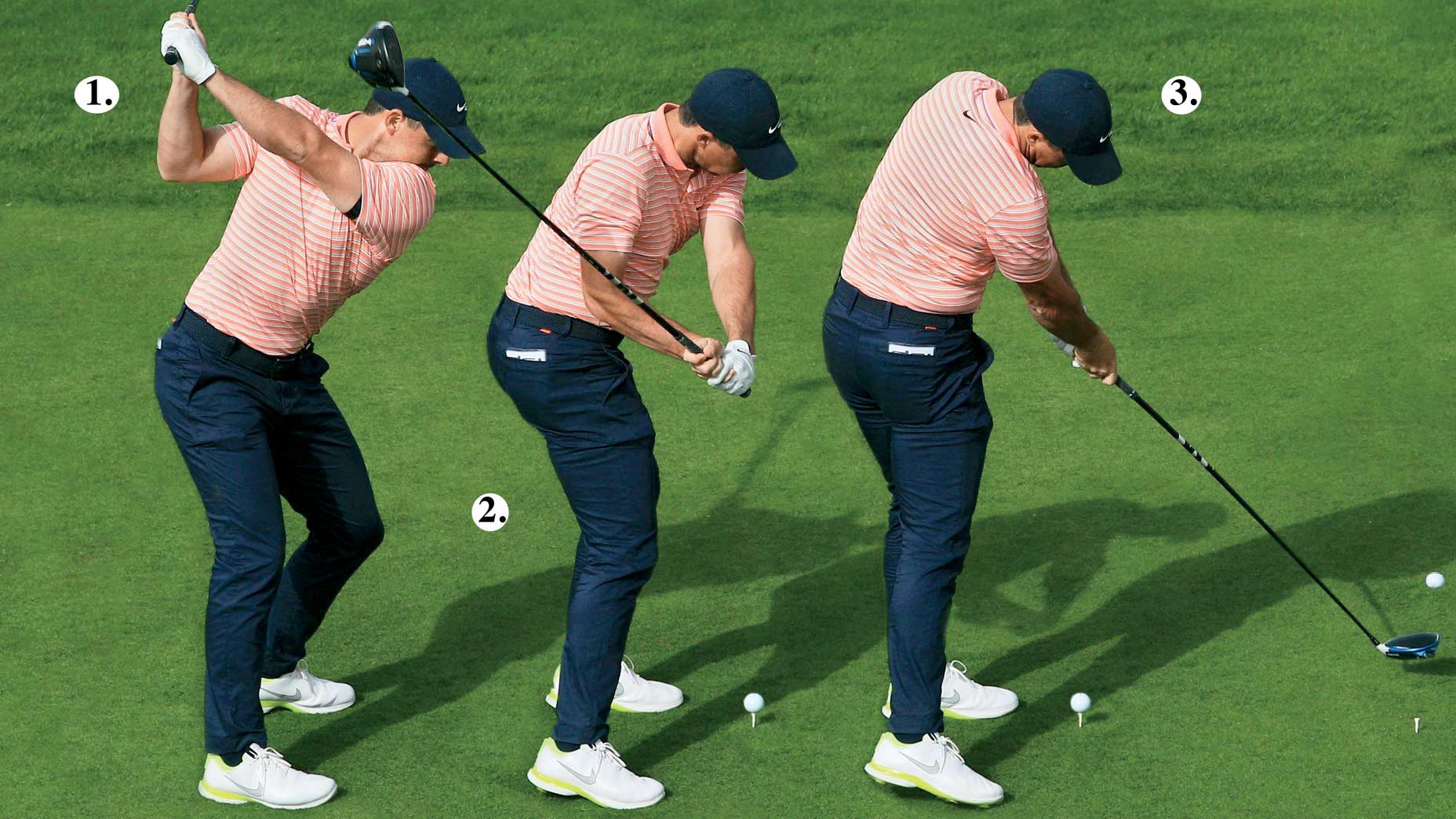 Rory makes a complete turn that positions his hands behind his trail shoulder. Perfect. Notice the gap between his legs. This comes from pulling his lead knee back behind the ball — a big-time rotation boost.

Rory’s driver swing is built perfectly for a draw, with the shaft laying on top of his trail forearm. (Slicers: Copy this!) His shoulders are closed to the target but his hips are opening — a classic power move. And check out that front foot plant!

This is what I call Rory’s “Nascar” move: Keep turning left! With his hips cleared and shoulders open, Rory continues to rotate. Fact: Pros keep turning left to avoid hitting it left. 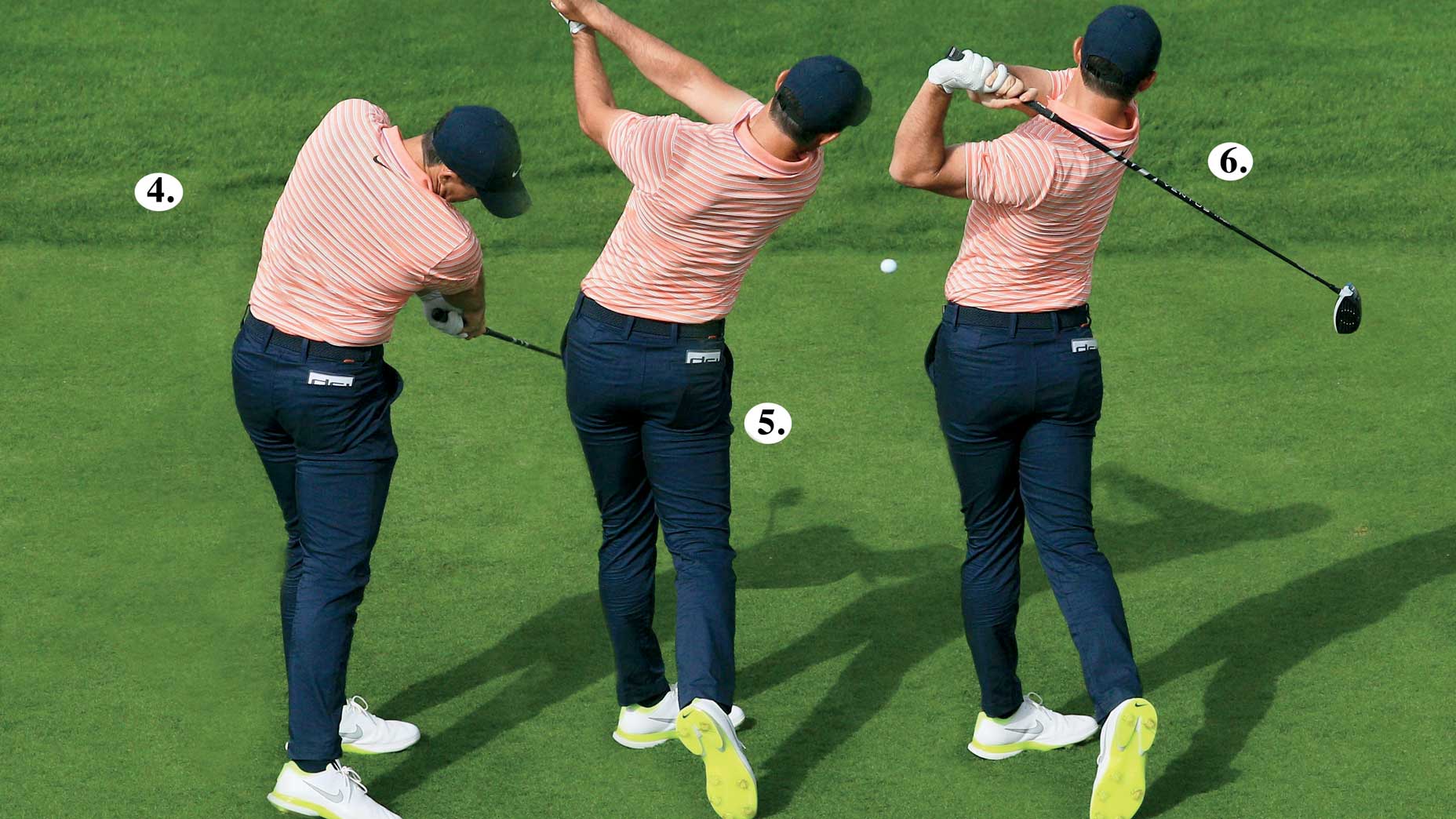 This is one of my favorite positions to look at, especially in a power hitter’s swing. Notice how his legs are long and extended, yet his torso is still pointed toward the ground and still turning. It’s evidence of how hard he is pushing into the ground even after impact.

A classic, high-draw release, with the back of his glove hand turning down and the clubhead turning over with zero hold off. (I know Rory played a fade in winning the Wells Fargo Championship back in May, but I don’t understand why he would ever go away from this swing.)

One word: balance. Try holding your finish until the ball lands. If you can do that, you’ll be in full balance like Rory and in position to watch the ball fly farther than ever.