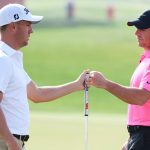 Justin Thomas and Rory McIlroy have played together several times in 2021.

But sometimes pros are very simply the people best-equipped to explain what’s going on with someone. Such was the case a month ago, when Jordan Spieth shed light on Rickie Fowler’s game. For a player of Fowler’s stature, Spieth explained, “it’s impossible to struggle in silence.”

So when Justin Thomas was asked on Wednesday what he thought about Rory McIlroy, my ears perked up. Was Thomas surprised, one reporter asked, by McIlroy’s recent struggles?

Sometimes a player in this circumstance will downplay, or deflect, or defer. Thomas did not.

Let’s review the struggles in question. If you’re looking to paint a rosy picture of McIlroy’s game, you can do it: In 12 PGA Tour starts this season, McIlroy has four top 10s, including a T8 at September’s U.S. Open and a T5 at November’s Masters. He’s finished outside the top 25 in just four of those 12 starts. And he contended several times in early 2021, including a third-place finish in Abu Dhabi.

But if you’re looking to make the case that McIlroy is off his game, all you have to do is ask him. Rory has described feeling “frustrated,” “off” and “searching” this year. He’s missed the cut in each of his three biggest starts of 2021 — the Genesis Invitational, the Players and the Masters. He has added coach Pete Cowen to work on his team, which means lifelong coach Michael Bannon will take a back seat.

In other words, McIlroy isn’t likely to quit the Tour anytime soon. Still, he was the undisputed world No. 1 a year ago. Now he’s No. 13, a spot behind Tony Finau.

“Rory is one of the most talented golfers I’ve ever played with, but I think something that is very underrated and people don’t realize is how hard he works,” Thomas said of his south Florida neighbor. “I mean, he’s out there a lot, puts in a lot, a lot, a lot of hours, and he’s very similar to me to where he always wants to get better, probably to the point where it hurts him at times, like it does myself.”

That’s where the real insight began. Thomas seemed to suggest that, if McIlroy’s anything like he is, he’s at risk of chasing perfection rather than dialing in the best version of the game he already has.

“I’ve often spent time with my putting or my golf swing trying to perfect it when in reality I just need to make work with what I have,” Thomas said.

Still, that doesn’t mean he disagreed with McIlroy’s decision to bring in another coach. In fact, Thomas has done something similar, bringing in scoring coach Matt Killen to supplement his full-time coach (his father Mike).

“I have no issue with him getting another opinion. I mean, that’s something that we’ve always talked about, my dad and I,” Thomas said. “You don’t need to necessarily completely change and go change coaches and trainers, but it’s like, hey, if you feel like something isn’t working … we did it back in the day when I worked with Matt Killen on my putting. My dad was like, ‘Hey, I just can’t figure out quite why he’s doing this, can you look at this?’

“It’s just having that second opinion, and sometimes hearing it said a different way just clicks for you, but then sometimes altogether a different coach just might — the methods and theories might make more sense to you. He’s clearly trying to do what’s best for his game. He’s not just doing it because I was playing poorly with this coach and I just need to change coaches because I’ll start playing better.”

Thomas won last month’s Players Championship to regain his spot at No. 2 in the world. But before that he’d gone through a lull of his own. To hear him tell it, pros have a hard time knowing why they’re struggling until something happens to click.

“We’re never as far off as we think we are, but it’s just internally. When you’re out there and you’re not playing well and you’re down on yourself, you feel like you’re so far away. It’s a lonely sport because you obviously have your caddie out there with you, but it’s easy to just kind of get down on yourself, at least for me, get kind of in a dark hole and feel helpless.

Thomas recognizes, big-picture, that mini-slumps happen in even the best PGA Tour careers. But he also knows that when a player is mid-slump, it’s tough to see the big picture.

In Wednesday’s presser, the next question Thomas faced was about the Tour’s new Player Impact Program, which has drawn fire for making the Tour’s most popular players even wealthier. And it’s true that neither Thomas nor McIlroy are likely to encounter financial strain anytime soon. But you can be rich and lonely. You can be a new father and still frustrated at work. You can be a top professional golfer and still be searching. That’s where Thomas’ empathy is particularly handy. Everybody’s dealing with something.

Let’s finish with some optimism. McIlroy will make his start at Quail Hollow next week, where he won his first PGA Tour event in 2010 (by shooting 66-62 on the weekend). Two weeks after that he’ll play the PGA Championship at Kiawah Island, where he won his second of four majors in 2012 (by a whopping eight shots). He’ll have plenty of fond memories to draw on.

Thomas finished with optimism, too.

“The thing about Rory is I know he’s going to work through it and he’s going to win a lot more tournaments and a lot more majors,” he said. “I still and always will have maybe more respect for him than anybody, because he’s one of the nicest guys I’ve ever met for how much success he’s had.”