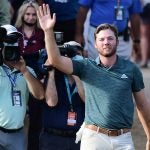 Keegan Bradley and Sam Burns shared the 54-hole lead at the Valspar Championship, and they battled it out late into the final round Sunday on the Copperhead Course at Innisbrook Resort and Golf Club in Palm Harbor, Fla. One player, however, made fewer errors. Here’s how the final round of the Valspar played out.

How it happened: Burns and Bradley pulled away from the pack early on Sunday afternoon, and a Burns birdie on 11 tied the pair at 17 under. They both made pars on 12, but everything changed on 13. Bradley hit his tee shot on the 182-yard par-3 into the water short of the green and made double bogey. Burns made par and then birdied the 14th to make it a three-shot lead. Bradley had a chance to capitalize off a Burns mistake on 15, when Burns made bogey, but Bradley missed his four-footer for par and couldn’t gain a stroke. Burns added the exclamation point on 16, rolling in an 18-footer for birdie to extend his lead to four. Burns bogeyed the 18th, but there was little drama, as he topped Bradley by three. Bradley finished as the solo runner-up.

Why it matters: It’s the first career PGA Tour victory for Burns, 24, and it came in his 76th career start. Previously his best finishes were a 3rd earlier this year and another 3rd in 2019. He entered the week 94th in the Official World Golf Ranking and is now exempt through the 2022-23 seasons. He’s also punched his ticket for the 2021 PGA Championship at Kiawah Island.

Best round: Viktor Hovland closed with a six-under 65 to vault up the leaderboard and tie for 3rd. It’s Hovland’s best finish since his T2 at the WGC-Workday Championship in February.

Up next: The PGA Tour heads to Charlotte, N.C., for the Wells Fargo Championship at Quail Hollow Club. Rory McIlroy, Bryson DeChambeau, Justin Thomas, Phil Mickelson and defending champ Max Homa are all in the field.