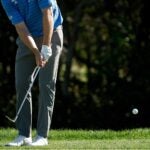 Shaking around the greens? Don't worry, we're here to help.

The angriest moment in golf isn’t when you lip out a putt or top a drive. Nor when you dunk one into a water hazard or find your ball plugged in a bunker. It’s something far worse — an offense so wretched it not only affects your sensibilities as a golfer but also as a human being.

I’m talking about the shanked chip. Ooh — it hurts just typing it. The shanked chip lives in the nightmares of anyone who has suffered one (and that means all of us). Amazing how something so bad can come from such a short swing. Madness, I tell you.

To this end, I bring you both good and bad news. The good news first: We know that every shanked chip results from one or more of the same three habits. The bad news? Breaking these habits is so easy you’ll be furious you haven’t shed them already.

Ready to jump in and start your GOLFTEC Journey? Fill out this form to book a swing evaluation or club fitting! A local GOLFTEC Coach will contact you to discuss your game and goals.
Book Now

I’ll use launch monitor data to explain, first focusing on impact location. Every great short-game player on Tour — from Phil Mickelson to Jordan Spieth — knows that the key to short-game success is rooted in managing the leading edge and its interaction with the turf. In studying GOLFTEC’s terabytes of short-shot data, we found that expert wedge players achieve this goal by striking the ball 17 millimeters, or roughly two thirds of an inch, below the sweet spot.

Shankers, on the other hand, take a different route. Analyzing the same GOLFTEC data set showed that the average strike point for a struggling short-game player is 23 millimeters, or nearly an inch, above the sweet spot. That’s a difference of nearly 40 millimeters, or 1.5 inches, just in average impact position!

The lesson? You might literally be hitting the ball in the wrong place. And why might you be doing this? Because of the second habit shared by bad short-game players: poor lie angle.

Bad short-game players almost always increase the lie of the club (get it more upright) through impact, another GOLFTEC analysis found, whereas good ones maintain the lie angle established at address. The result for those who do it properly is a more consistent leading edge that avoids the heel digging that can lead to fat shots and, yes, the shanks.

But hey, maybe you don’t have access to a launch monitor and you’re looking for a fix you can implement in a flash. In that case, focus on the path your club travels on to the ball. Another GOLFTEC study found that players with a tendency to shank chips strike the ball “off neutral” — either too far in-to-out or out-to-in. Guys like Phil and Jordan, on the other hand, motion the club straight back and through.

The anti-shank recipe is simple: Swing on a neutral plane, strike the ball low on the clubface and make sure you’re hitting the ground with the middle of the sole. If you implement these changes properly, it’ll be au revoir shanks for good.

GOLFTEC VP of Instruction Nick Clearwater is based at the company’s headquarters in Denver, Colo.