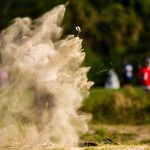 Brendan Steele hits out of the sand on Thursday on the 15th hole at the Ocean Course at Kiawah Island.

Bubba Watson, during last year’s RBC Heritage, hit his ball into a greenside bunker. Or because Harbour Town Golf Links is on the beaches of South Carolina, he hit into a home. Watson called over a rules official.

“You gonna grab it?” Slugger White would twice ask Watson of the sand crab near his ball.

No, Watson said. Nor would he swing.

“We got enough issues in our world right now,” Watson said. “We don’t need crab issues, you know what I’m saying?”

The PGA Championship does.

About two hours north of Harbour Town, crabs could be an issue again. They are also native to the Ocean Course at Kiawah Island, and a notice to players specifically called them out under “ground under repair.”

“Holes or casts made by sand crabs are ground under repair,” the note says. “But interference does not exist if the hole or cast only interferes with the player’s stance.”

Also spelled out in the notice are the crabs’ homes themselves. As described here, none of the sand at Kiawah will be played as a bunker, which means players may ground their club and make practice swings in these areas. “As we have in previous championships, the sandy areas will not be bunkers, and we’ve notified all the players of that,” said Kerry Haigh, the chief championships officer for the PGA of America, earlier this week, “So players will be able to take practice swings out of the sand areas. It’s part of the general area.”