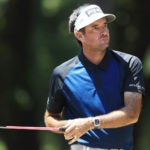 Bubba Watson did not save par from the greenside bunker on the 17th hole at Harbour Town Golf Links.

He did save a crab.

Watson’s yellow ball found the sand on his second-to-last hole during Saturday’s third round of the RBC Heritage. The animal found a roof. As Watson approached the bunker, the crab had burrowed underneath the ball.

“I don’t want the world to get mad at me, you know what I’m saying?” Watson said to his caddie, Ted Scott; his playing partner, Rory McIlroy; and McIlroy’s caddie, Harry Diamond.

McIlroy crouched down and tried to gently poke the crab with a club.

“Stick your tee down there, man,” Watson said to McIlroy. “It won’t get your finger.”

“And if it does, it’ll be funnier,” Diamond said.

As official Slugger White drove up, the crab crawled away. Everyone at Harbour Town, apparently, has to respect the rules.

“You gonna grab it?” White asked.

“No, no listen,” Watson said. “It walked around and went under my ball. And then right when you pulled up, it walked away. It’s upside down right now. I think it’s dying because that sand has to be 1,000 degrees.”

White asked again if Watson wanted to pick it up.

“No, no,” Watson said. “There was a camera, and you know, people get mad because I hit an animal.”

“We didn’t want to hit it when the crab was against the ball,” Diamond said.

“We got enough issues in our world right now,” Watson said. “We don’t need crab issues, you know what I’m saying?”

“I heard that, brother,” White said.

Watson hit his shot to within about 17 feet. Without issue.

“Not the sort of crab issues most people are worried about,” McIlroy said as Watson’s ball trickled past the hole.