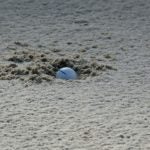 There may not be a more deflating feeling than walking up to a greenside bunker and seeing your ball plugged. The sand is already a difficult hazard guarding the greens — Brendon Todd leads the PGA Tour this season at a hair above 69% — but when your ball catches a nasty lie, there is little hope of getting up and down.

However, there is hope yet on plugged lies if you know the proper technique. That’s where LPGA Tour legend Laura Davies comes in. In a recent video posted on Twitter, Davies shared some insight on how to approach these dreaded shots.

“They’re obviously difficult shots because you have no real control over it,” Davies says.

She explains that she learned this technique from fellow European golf star Ian Woosnam while the two were playing in Japan.

“I thought he was joking,” Davies says. “But it actually works.”

The technique is simple: you hood (close) the clubface severely at address while also taking an ultra-light grip. On the takeaway, take the club well outside your normal path and then blast down on the ball. If done correctly, the clubface will open on impact and the ball will pop out.

“It actually works,” Davies says. “That’s something that Woosy taught me about 20 years ago and I’ve used it many times in tournament rounds. It’s a bit advanced, but give it a go.”