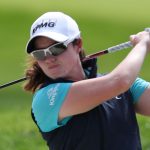 Leona Maguire hits a shot on Saturday on the 9th hole at Lake Merced Golf Club.

But Leona Maguire bore the brunt of it instead.

Saturday, during the third round of the LPGA Mediheal Championship, Maguire sailed her approach shot right on the par-4 1st at Lake Merced Golf Club and into the pine trees — where it nested. About 50 yards below, Maguire, playing partners Lauren Kim and Danielle Kang and their caddies would try to spot it in the allotted three minutes to find a lost ball — if Maguire could, under the rules, she would unlock two additional options of relief: lateral, under rule 19.2c, and back-on-the-line, under rule 19.2b. If she couldn’t identify her ball, she would be forced to take the much more penal stroke-and-distance relief option, under rule 19.2.

The tree kept the ball hidden. Until it didn’t.

As Maguire was talking with an official from just off the green, and Kim was lining up a putt, Maguire’s ball dropped — shortly after the three minutes.

“That is something that I have never seen,” analyst Morgan Pressel said on Golf Channel’s broadcast. “Oh what an unfortunate way to start the round.”

Indeed. Maguire, who started the round one shot behind Kang for the lead, was still both penalized a stroke and forced to go back and replay the shot — despite her original ball now just a handful of yards away. She’d go on to double-bogey the hole on her way to shooting a two-over 74.

“Her ball was stuck up in the tree and then it fell down and it was her ball that fell down, and then we were trying to figure out what the timing was, whether it was a lost ball and all that,” Kim said after the round. “I just felt just awful. Like Danielle and I were talking about it, and at the end of the day, we felt like it probably was more than three minutes.

“But, you know, in those kind of situations, it’s just kind of — you just kind of have to say the hard thing to say and kind of move on. But I felt so bad. I was so excited for her because as I was setting up to my putt it fell out of the tree. I was like, that’s great, we found the ball, let’s move on. And then it turns out it was the timing issue. So, yeah, that was a challenge.”