WATCH: Lydia Ko reaches a par-5 in two with a driver from the rough 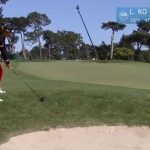 Lydia Ko took a risk that paid off at the LPGA's Mediheal Championship.

As a three-time winner at Lake Merced, it’s safe to say Lydia Ko is in comfortable territory at this week’s Mediheal Championship. The 24-year-old knows the course better than most, and nowhere was that more apparent than on the par-5 15th hole on Friday.

At only 479 yards, the hole is reachable in two for the field’s longer hitters, and should provide a straightforward birdie or even eagle opportunity. That is, unless you make things more difficult for yourself by missing the fairway off the tee.

That’s exactly what happened to Lydia Ko, who found herself facing a 263-yard second shot on an uneven lie in the rough just above a fairway bunker. But instead of laying up, Ko opted to go for the green with … driver? Indeed! Check out the video below.

Ko managed to pick the ball cleanly, and incredibly, found the green in two. Unfortunately, she three-putted from there for a par, but nothing could diminish the magnificence of the shot.

So how did Ko muster the courage to go for driver from the rough? Turns out, she’d done it at Lake Merced before.

“I was telling [caddie] Derek, I was like, You know what, it’s actually not my first time hitting a driver off that same lie,” Ko said after her round. “At the same hole in the same spot. I was so mad with the way I hit that drive couple years ago that I was like, You know what, Johnny, who I was working with at the time, just give me the driver, and I hit it and went just short of the green.

“Today as I was walking down I was like, Man, it would be pretty cool if the lie is good and then I know I can hit a driver,” Ko continued. “Because you’re going so up on it. The worst case scenario I miss-hit it and still going to be a pitch shot. So it’s a shame that I three-putted from there. Other than that, I thought that was probably the shot of the day. I pretty much couldn’t have done any better from there.”