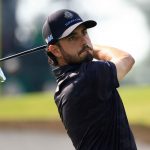 Abe Ancer in the first round of the 2021 Masters.

“Welcome, folks, to Jeopardy! Masters ’21 Edition. I’m your host, Cleaned Up NFL Quarterback Aaron Rodgers. Tiger, the board is yours.”

“Nobody calls me that.”

“What is, What are people in the Twitterverse saying about Abraham Ancer, my 2019 Presidents Cup singles opponent, upon learning that the Mexican Olympic hopeful had received a two-shot penalty after his first round of the 2021 Masters, after brushing a tiny amount of fluffy sand with the flange of his open-faced sand wedge, on the theory that he should have been able to see the penalty with his naked eye, in accordance with Rule 12.2b (1).”

“Judges? OK! A little more than we needed, but yes. Tiger, the board is still yours.”

This is opinion: The Masters rules committee did not apply the rulebook’s naked eye clause correctly in the post-round Abe Ancer penalty situation on Thursday.

Ancer was in a greenside bunker on 15. He was about to play a floppy explosion shot from fluffy sand with an open-faced sand wedge. He couldn’t see the sand underneath his open-faced wedge. He waggled twice. The video shows that at as he ends his second itty-bitty waggle and starts his backswing he makes contact and flattens a little tiny fluffy sand hill. It’s completely insignificant.

Doesn’t matter. You can’t make any contact with the sand when you are playing your shot. It’s a two-shot penalty. It gets to the heart of one of golf’s basic principles: play the ball as it lies. Don’t do anything to make your lie — the way your ball sits, the challenges you face — different.

You certainly wouldn’t step on your ball, right? So don’t touch any of the sand right behind your ball, either.

Ancer touched sand, with his clubhead, right behind his ball. He got the penalty he deserved, but not, I don’t think, for the right reason. Maybe he could have seen what he had done, but I doubt it. More likely, I think is that he could have felt it. Yes, the sand, where he was in particular, was fluffy. But the feel these players have is way beyond ordinary.

The point here is that the “naked eye” clause is flawed. It’s too limited. There are times when you can and should see that you have broken a rule. But right alongside that, there are times you should know, by feel, and through your experience as a golfer, that you have broken a rule. If Ancer couldn’t see it, it’s quite possible he could have felt it.

But the real starting point for the problem here, for this penalty that Ancer did deserve, is that his clubhead is way too close to his ball. He’s asking for trouble.

There’s almost a pandemic of that kind of thing today, in professional golf. That flange should not get within an inch of your ball, if you want to be safe. And you should want to be safe.

I have noticed in recent years, and only in recent years, that many players routinely let the flange of their wedges rest in the sand between shots in practice bunkers. I don’t know why you would ever want to do that, since you can’t do it when you’re playing for real. If even a hint of that practice spills over and into your tournament play, it can be wildly costly. The suggest here is to hover, always.

The rulebook is getting kinder and gentler all the time. Did you drop your sand wedge in the sand while walking to your ball? No problem and no penalty, and have a nice day! Before 2011, Ancer would have been DQed for signing an incorrect scorecard, had the rules breach been discovered after he’d signed his card. It was a better system. It demanded the players to be responsible for their cards. But the advent of high-def TV changed all that.

The lesson here, of course, is to show your ball, and the rules — and your opponents — your complete respect. Golf cannot be a free-for-all. This is a good time to double down on the one-inch flange-and-ball, play-it-safe social-distancing guideline.

One last thing. People want to know how did Ancer’s shot from the trap on 15 get so scrutinized. Is every shot so scrutinized by rules officials in secret locales with zoom and slo-mo and play-it-again-Sam capabilities? No. It’s not possible.

Is it possible that a rules official happened to take a close look at Ancer for some random reason? It’s possible.

It’s also possible that somebody called in.

What? I thought they did away with that whole call-in thing?

They — officials at the PGA Tour and the USGA and other golf bodies — said they were ending the practice by which random viewers at home could call in with potential rules violations. The purpose was to keep the kooks at bay.

But if a person known to officials with credible information calls in, that information does not get ignored. The logic there is the rules are the rules and, finicky though they are, they are also the foundation for every aspect of what makes competitive golf the game it is. The Ancer penalty should be a wake-up call for other players. For every player, really.

We resume our earlier programming.

“OK, Lovable Pin Positions for $200. And the answer is, ’It seemed like Sunday on Thursday.’ Tiger? I heard you were fast and you are.”

“What was the first-round hole location on the par-3 16th, middle and left and down that slope, where you would normally expect to see it on Masters Sunday?”

“Yeah, Rodgey, Rosie hit a little trap-draw shot there on Thursday, looked like he took a little something off an 8-iron — I know he and Folesy work on that — and it kind of pitched and rolled on down and he couldn’t have had 15 feet, but you know if you’re gonna shoot 65, you’re probably going to have to make a 2 there, because if you play the other three par-3s in even, you’re doing great — you just don’t make up ground on the par-3s at Augusta National. I mean, yes, you can steal one, now and again, but when the course is firm and fast—”

“Tiger, thank you, thank you. We have a schedule to keep. The board is yours.”