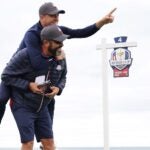 Justin Thomas and Jordan Spieth's caddie Michael Greller had some fun during a Tuesday practice round at Whistling Straits.

The Ryder Cup is unlike a regular PGA Tour event in many, many ways. First, it’s a team event, pitting 12 players from the U.S. against 12 from Europe. Second, there are three different formats across three days of play, foursomes, four-ball and singles matches.

It’s also unique in that special rules agreed to by both captain’s are put into place, and released as the Ryder Cup Captains’ Agreement. This year’s rules document from captains Steve Stricker and Padraig Harrington is full of oddities. Look no further than the “envelope rule,” where a secret player is chosen by each team to sit out the Sunday singles matches if a player from the other team is injured (this year’s event has a second envelope rule, in light of the Covid-19 pandemic).

But it’s another rule relating to penalties for arriving late to matches, and the aforementioned formats, that could result in a true match-play rarity.

In singles play, players are required to be ready to play at the starting point no more than five minutes after their tee time. The punishment for arriving late is a loss of the 1st hole.

In foursomes, or alternate shot, both players are required to arrive on time. If they are late but less than five minutes after their tee time, the penalty is a loss of the 1st hole. Should they be more than five minutes late, they are disqualified and lose the entire match.

All of that makes sense, but things get interesting in four-ball play.

Four-ball is different from foursomes in that all four players play their own ball, with the lowest score from each team on a hole counting toward the total score. For this reason, the rules regarding starting on time are very different.

Here’s the rule: “Four-Ball (one partner missing): No penalty. The match starts on time and the absent partner may join between the play of two holes.”

According to this rule, one player on a team can completely miss his tee time, and that team will receive no penalty. As long as the other player is on time, the match starts without the missing player, forcing the player who did show up on time to play by himself against two players from the other team.

But the key part of this rule is the closing phrase: “the absent partner may join between the play of two holes.” What this means is that not only does one player not have to make his tee time on the 1st hole, he doesn’t have to show up at all.

For example, say Jordan Spieth and Justin Thomas are slated to play Saturday afternoon four-ball against Ian Poulter and Sergio Garcia, and a napping Thomas sleeps through his alarm, missing his tee time. When he wakes up, he decides it’s not worth rushing to the course and goes back to sleep.

In this scenario, Spieth would then be faced with a 2-on-1 match for the entire round, with his scores counting for all 18 holes and the Europeans picking the best score between the two of them. Even stranger, should Spieth somehow prevail in the 2-on-1 match, team Thomas/Spieth would receive a full point, without JT having to take a single swing.