Ryder Cup ‘envelope rule’: Why there’s a secret player only the captain knows 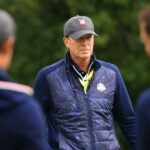 A rarely used Ryder Cup practice is invoking the “envelope rule,” which was created in the 1970s and put in place to make sure there’s a fair outcome if one player happens to be injured. This year, though, for obvious reasons, there’s also a Covid envelope rule.

But first, let’s back up. What’s the envelope rule? It was first put in place at the 1979 Ryder Cup at The Greenbrier. That was the first year the format changed to what it still is today: four foursomes matches and four fourballs matches on Day 1 and Day 2, and 12 singles matches on Day 3.

But what happens if a player gets injured and can’t continue? For foursomes and fourballs it’s rarely an issue, since four players sit per session and can jump in if necessary, but no one sits for singles. That’s where the envelope rule comes in handy. When captains submit their singles lineups come Sunday at Whistling Straits, they’ll also be asked to provide a sealed envelope with the name of one player who would have to withdraw if another golfer from the other team couldn’t play due to injury or illness, prior to the matches starting. That match would then be halved.

This year, though, due to Covid-19 protocols, the captains will also be asked to submit a second sealed envelope, this one with the names of three players, in order of substitution, who would have to sit out if a player from the other team tested positive for Covid-19 and had to withdraw. If a player from each side has to withdraw, they are treated as having been paired together in the same match, and the envelope would not be needed.

“The person that goes in the envelope, the captain decides, and nobody ever knows,” European captain Padraig Harrington said on Tuesday. “We hope that stays that way. But we’ve had a few injury pull-outs over the year, so it would be just very similar to that. No real difference in how it works.”

According to the captains’ agreement, if a player tests positive for Covid-19 prior to the Opening Ceremony on Thursday, that player will be replaced by either a captain’s pick or via the qualifying rankings. If a player tests positive for Covid-19, even during a match, he would be ineligible for the remainder of the match and Ryder Cup. That would give captains fewer players to choose from for team play and could likely, depending on numbers, invoke the Covid envelope rule for singles play. If multiple players test positive, either from one team or both, the situation would be assessed by both organizations to determine its impact on the remainder of the Ryder Cup.

The envelope rule has been used just three times, most recently in 1993, when Lanny Wadkins volunteered himself for the envelope at The Belfry. Wadkins sat out the final session when Sam Torrance couldn’t play with an injured foot.