Rules Guy: Where do you drop a ball that carries a penalty area, but ricochets backward into it? 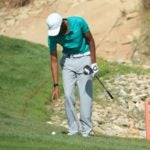 A player takes a drop from a red-staked penalty area at the 2020 Saudi International.

This actually happened. Imagine a stream in the middle of the dogleg and down the fairway’s inside curve. A player hits his shot and easily carries the water, but the ball conks a tree on the side of the fairway and ricochets backward into the water without touching the ground. No one knew where the drop should be — on the side of the water closer to the green because the tree is there, or behind the stream because it never touched the ground before going in the water? —Dennis Thomas, via email

Rules Guy believes you, Dennis. Indeed, he often gets variations on this query. The first thing is, you have to identify where the ball last entered the penalty area.

Here’s something that might surprise a few folks not familiar with the Definition of a Penalty Area: The edge of a penalty area goes verti­cally, i.e., up and down. So where the ball entered the penalty area can be, and in this case is, very dif­ferent from where the ball entered the water itself — it entered in the air. That’s the point you use as a reference to take relief.

Now, you didn’t say whether this was a red or yellow penalty area. If it’s yellow, the options (stroke-and-distance or back-on-the-line relief) require you to drop on the fairway side; if it’s red, you get the same options plus lateral relief, which would potentially allow for a drop on the green side if you can get relief from the point where the ball last entered with two club lengths or less, no closer to the hole.