Rules Guy: This question about the legality of borrowing a tee is the year’s most read 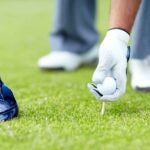 Are you allowed to borrow a tee from a playing partner?

In every issue of GOLF Magazine, our readers are invited to submit their most confounding rules conundrums to our resident expert, the Rules Guy. In 2020, Rules Guy covered just about every angle of the game we all love, from using a tee to probe a bunker’s depth to whether or not it’s permissible to watch the group ahead of you putt.

But there are some topics that piqued our readers’ interest more than others. A question about whether a borrowed tee from a playing partner counts as using someone else’s equipment was published online in September, and became the most-read Rules Guy question of the year. You can revisit both the question and Rules Guy’s answer in its entirety below. The other day, I picked up a tee someone had left on the tee box and proceeded to use it. My friend told me this was a penalty, for using someone else’s equipment. He said that if I’d wanted to use it, I needed to have put it in my pocket first to claim that it’s mine. What’s the ruling? —Wade Lindren, via email

Love reading about the rules? Remember, you can always send your rules-related queries, confusions and comments to rulesguy@golf.com. We promise he won’t throw the book at you.

6 keys to putting ultra-fast greens, according to a Top 100 Teacher

Why does Hideki Matsuyama 'pause' so much in his golf swing?

Why is Tony Finau looking at the hole while he's putting at the Masters?