Rules Guy: My ball fell off the tee mid-swing. Do I have to take a penalty for hitting a ball in motion? 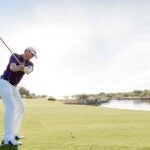 What do the Rules say about a hitting a ball as it falls off a tee?

In a recent match-play competition, my opponent had addressed his ball and started his swing. Mid-swing, his ball rolled forward off the tee, and he wound up hitting the moving ball. (The shot even found the fairway.) I know there are rules that penalize a player who strikes a ball in motion. What’s the story here? I’m hoping you say two-stroke penalty or loss of hole. —Erik Morrison, via email

Not exactly the soul of generosity, are you Erik, but at least you’re honest.

The general principle in golf, as laid out in Rule 10.1(d), is that you must play the ball at rest and can’t make a stroke at a moving ball, lest you indeed incur the general penalty of two strokes in stroke play and loss of hole in match play.

However — and this is where your disappointment will kick in — there is a carve-out where, if the ball starts moving during one’s backswing or stroke, and you continue on to hit the ball while it’s moving, there is no penalty.

That’s true as it relates specifically to a ball falling off a tee, per Rule 6.2(b)/5 — yes, the rules contemplate almost everything — and everywhere else, per Rule 9.1(b). In these scenarios, the stroke counts and you simply play the next shot from where it lies.