Rules Guy: Is it a penalty if your ball moves as you prepare to address it? 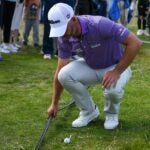 What do the Rules say about a ball moving as you prepare to address it?

My partner’s ball lands outside the bunker on the edge of the lip of a trap. He walks into the trap without a club to assess his lie. While in the trap, the ball moves and rolls into the bunker. Does he play the ball without penalty as it now lies in the bunker; play it as it lies with a one-stroke penalty for causing the ball to move; or replace the ball in its original position without penalty?
—Andy Loesberg, via email

The answer is: It depends.

The standard for considering the player to be the cause of a ball’s movement is “known or virtually certain.” That’s, like, 95 percent or more for any math types out there.

This case doesn’t sound like it reaches that threshold, in which case natural forces become the cause of the ball having moved. So, under Rule 9.3, your partner plays from the new spot in the bunker.