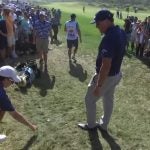 Phil Mickelson's day was just bizarre from start to finish.

As if the final round at the PGA Championship couldn’t get any weirder, a spectator picked up Phil Mickelson’s ball while it was in play.

You read that correctly.

As the 50-year-old took a four-shot lead with eight holes to play, he piped his drive left and into the gallery on the 11th hole. From the blimp shot looking down, a frenzied crowd gathered around the ball. And apparently, one of them picked up his ball.

“It was right here, then she picked it up and it rolled to right there,” another spectator told Mickelson as he approached the crowd.

The difference between those two spots, mind you, was just a couple inches. Maybe half a foot. But a weird instance, nonetheless.

“I’m under the the understanding that somebody picked it up and put it back in the general vicinity,” Mickelson explained to the Rules official. He even told Brooks Koepka to go ahead and play ahead if he wanted to.

So, Rules officials at home, what’s the plan of action? Free relief? Play it as it lies? The ruling is rare, but it’s really straightforward. Mickelson has to rely on the spectators who told him about the weird fan interaction and where they believed it to originally be. Then, all he has to do is replace it in that area and he’s good to play without a penalty.

“I don’t get that club length and a drop,” Mickelson joked to the official. That’s quite chummy for the final nine holes at a major championship.

While Koepka watched on from the fairway, Phil thinned his second, bounding down the fairway. “That didn’t get four feet off the ground,” Dottie Pepper said. It didn’t have to. Mickelson made par to maintain his same advantage.