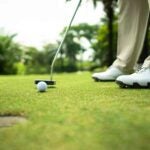 What do you do if you accidentally double-hit a putt?

I know the latest Rules revision removed the penalty for pulling a T.C. Chen — a double-hit shot now just counts as one stroke. But does that also hold true on the putting surface? Recently, my opponent had a short putt that he “inadvertently” hit twice and holed. —Mike Stout, Myrtle Beach, S.C.

First, Mike, let’s spare a thought for T.C. “Two Chip” Chen, remembered for one cruel twist of fate while leading the 1985 U.S. Open rather than his playoff victory over none other than Ben Crenshaw at the 1987 Los Angeles Open or for being the first Taiwanese player to earn a PGA Tour card.

Like Bill Buckner in the 1986 World Series, Scott Norwood in 1991’s Super Bowl XXV or Chris Webber in the 1993 NCAA Division I Basketball Championship, no one wants his worst moment to be his legacy, nor should it be.

Back to the matter at hand: Rule 10.1(a) applies anywhere on the course, from the highest of rough to the shortest of grass. Your air quotes suggest that you believe your opponent’s double hit was no accident, however, and if you are convinced that’s the case you’re free to bring the matter to the committee’s attention for adjudication as to whether Timmy Two Times played a moving ball. But that seems almost as sad as intentionally double-hitting a putt.

Need help unriddling the greens at your home course? Pick up a custom Green Book from our sister company GolfLogix.