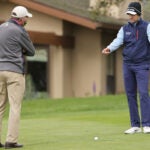 Russell Knox talks to a rules official on Sunday on the 1st hole at Pebble Beach.

Russell Knox stood straight up, put his right hand in his pocket and stared down. He had missed a 2-foot birdie putt on Sunday on the 4th hole at Pebble Beach when his ball brutally did a 180 around the back of the cup and spun out.

Knox’s day would keep turning for the worse.

PGA Tour rules official Gary Young was waiting for him. The rules infraction that he was told he avoided on the 1st hole an hour earlier during Sunday’s final round of the AT&T Pebble Beach Pro-Am was being changed.

“After that short miss, it’ll be a double-whammy,” analyst Luke Elvy said on the Golf Channel broadcast.

On the 1st, after a tee shot down the left side of the fairway, Knox addressed his ball, bounced his club slightly behind it a couple of times, then pulled back and stood straight up. He had seen the ball move. About a minute later, it apparently moved again. An official was called over, as Knox wondered whether he would be assessed a one-stroke penalty for breaking rule 9.4(b) of the Rules of Golf, which penalizes players who cause their ball to move — even accidentally — when it is off the green.

“OK, the club went down, for sure, and then another waggle, and then the ball moved,” Knox told the official. “And then it moved again about a minute later.”

The official asked Knox to explain himself again.

“So I was over it,” he said. “I mean my first initial club definitely hit the ground and then I was out and I waggled again and I looked down and the ball moved a little bit.”

The explanation convinced the official that Knox did not cause the ball to move, and he drove off on a cart.

An hour later, a video review said otherwise, and Young told Knox that his par 4 was being changed to a bogey 5. Much like the penalty that Maverick McNealy incurred a day earlier.

Just behind the 5th hole, McNealy addressed his ball, and almost instantaneously, it rolled off a pitch mark and back into the rough. After a conversation with a rules official and a video review, McNealy, too, was given the one-stroke penalty.

“In the moment, based on the information that they received from Russell Knox, there’s no penalty assessed, but they go take a look at it and say, well, no, the club comes down simultaneous, much like what happened with Maverick McNealy yesterday and there is a one-shot penalty assessed,” announcer Terry Gannon said of Knox’s penalty on the broadcast.