Why the PGA Tour played preferred lies in near-perfect conditions 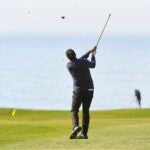 Phil Mickelson and his Tour competitors had life made a little easier Thursday with preferred lies.

In an extremely equitable ruling, the PGA Tour instituted lift, clean and place rules Thursday at Torrey Pines, despite no rain in the immediate forecast, just sunshine.

That’s right. Despite Thursday being a gorgeous day in San Diego — broadcaster Trey Wingo called it “picture perfect” — the Tour made the ruling because bad weather is expected for Friday. The notice was blunt: “Because Friday’s forecast calls for heavy rain (and two courses are being used during the first and second rounds), preferred lies are in use today at the Farmers Insurance Open.”

With Torrey Pines employing both its South and North courses, the Tour preemptively played its first round with preferred lies so that it could also do so during the second round, where conditions will likely be more difficult and players will be playing a different course. While lift, clean and place rules are not exactly foreign — this is the second time they’ve been used already in January — they rarely come in advance of the bad weather. Generally it’s only after heavy rain that the Tour institutes something like that.

It has been a weird week of weather in the San Diego area to this point. The Tour actually shut down the course on Monday afternoon due to high winds. But enough to change how the tournament is played? The reaction on Twitter was less than enthusiastic.

Lift, clean and place rules simply mean that players can pick up and clean off their golf ball if their previous shot has finished in an area cut to fairway height or less. After cleaning their ball from any errant dirt or mud, they can then place it back in the general area, often within a specific distance (I.e. one or two club lengths).

So when watching the action Thursday, don’t be surprised when a perfect drive in the fairway still results in a player momentarily cleaning his ball. And don’t be surprised if the lowest scores are a little lower than normal. It never hurts to have a perfectly clean ball placed in a spot of a player’s choosing.