‘We had no ill will’: U.S. players explain Solheim Cup rules drama 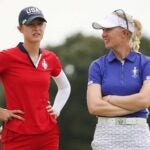 TOLEDO, Ohio — Team Europe showcased its dominance on Day 1 of the Solheim Cup, but perhaps the biggest story of the day was the rules drama involving Madelene Sagstrom and Nelly Korda.

The incident occurred on the 13th green when Korda’s eagle try slid past the hole and settled on the lip of the cup. The World No. 1 sank to her knees in disbelief that the ball did not drop, and Sagstrom walked over and picked up the ball, conceding the tap-in for birdie.

But the referee assigned to the group determined that Sagstrom had not allowed 10 seconds to pass to determine if the ball had stopped moving before picking up the ball. Because of this interpretation, Korda’s putt was considered holed, and the Americans won the hole for a 1-up lead, an edge they maintained through the remainder of the match.

Sagstrom was visibly upset after the round when explaining the incident from her vantage point.

“Obviously I wasn’t following the rules about leaving the ball for 10 seconds,” she said. “But I do believe in integrity and honor of the game of golf, and I would never pick up a putt that had a chance to go in.”

The match was never the same after the controversy. Playing alongside Sagstrom, Nanna Koertz Madsen said the pro-American crowd started relentlessly heckling the Europeans from No. 13 onward.

The relationship with their American adversaries also turned frosty after the rules debacle.

“I don’t think we talked much,” Koertz Madsen said.

“Not even thank you for the match,” Sagstrom added.

The incident also rattled the American side. Korda called the ordeal “awkward,” and the aftermath left her and playing partner Ally Ewing in a fragile state.

“We had no ill will,” Ewing said. “But the rules committee did reach that decision. It rattled both teams and we had to fight through it.”

The two teams tied the final five holes after the incident, giving the Americans their first full point of the Solheim Cup.

When the Americans met with the press after the round, Korda and Ewing were dispirited with how the drama unfolded but maintained their innocence in the ordeal.

According to Korda, the rules official approached them as they walked off the 13th green to inform them that the ruling was under review. Korda and Ewing had no say in the matter, and the decision was a unilateral one from the rules committee.

“Hopefully [the Europeans] are okay with us,” Korda said. “We didn’t want it to happen this way. It’s very unfortunate, but they played solid golf, we also played solid golf. At the end of the day hopefully we can put this behind each other and move forward.”

It remains to be seen how the controversial episode will affect the remainder of the Solheim Cup, but things are certainly more tense at Inverness than they were just 12 hours ago.