The 5 most dramatic and controversial moments in Solheim Cup history 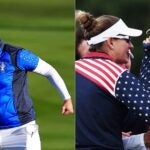 Suzann Pettersen (left) and Alison Lee both feature in our roundup of dramatic Solheim Cup moments.

The last decade of Solheim Cups have been pretty evenly matched. Since 2011, Europe has won three times and the United States twice, and the Americans lead the all-time series 10-6 overall.

This year, the 17th Solheim Cup will be played on American soil at Inverness Golf Club in Toledo, Ohio. And if the past three decades are any indication, there will be plenty of fireworks to enjoy. Take a trip down memory lane as we revisit the five most dramatic moments in Solheim Cup history.

Suzann Pettersen is an LPGA legend. The 40-year-old Norwegian won 15 times on the LPGA Tour, and seven times on the Ladies European Tour, including two major championships. She was also a stalwart on the Euro Solheim Cup team, with a career record of 18-12-6 in an incredible nine appearances. That’s why it was so epically fitting for Pettersen to be faced with the winning putt — as a 38-year-old captain’s pick, no less — in the 2019 Solheim Cup at Gleneagles in Scotland.

To set the stage: the score was tied at 8-8 heading into Sunday singles. American Danielle Kang lost the opening match while Nelly Korda won the next one. The lead see-sawed between the two teams for the entire afternoon. The U.S. briefly held the upper hand toward the end, but Europe rallied, winning two of the last three matches, until there was only Pettersen’s match against American Marina Alex remaining. The two were all square on the 18th hole. The score was 13.5 to 13.5, and Pettersen faced a seven-foot left-to-right putt to win the Cup for Europe. She drained it, giving Europe its first Solheim Cup win since 2013. And to top it off, Pettersen announced her retirement from the game shortly after, ending her competitive career on the absolute highest of highs.

Pettersen was also a major player in a dramatic controversy back in 2015 — albeit for less triumphant reasons. The 2015 Solheim Cup was played in Germany, at Golf Club St. Leon-Rot.

Things were not going well for Team USA, which trailed Europe 10-6 after the team portion of the competition. The Americans had an especially sour taste in their mouths after what transpired during the afternoon four-ball. American Alison Lee was playing with Brittany Lincicome against Pettersen and Charley Hull. The Americans were tied with the Euros on the 17th hole, and Lee had a putt to win. She missed, and thought she heard from her competitors that the 18-inch putt she had left was conceded. She picked up the ball, and Pettersen said the putt had not been conceded. Whoops.

Tears were shed on both sides, and the American duo lost the match, 2 down.

Pettersen was widely criticized for her role in the ordeal, and she issued an apology the next day. But the perceived injustice lit a fire under the Americans, who rallied to win the 8.5 points they needed in Sunday singles to reclaim the Cup. The final score: 14.5-13.5, good enough for the biggest comeback ever in the Solheim Cup’s 25-year history.

The enforcement of match play rules featured in another memorable controversy back in 2000, at Loch Lomond in Scotland. And this time, the victim was none other than Annika Sorenstam.

Team Europe was dominating 5.5-2.5 as the competition moved into the fourball portion of the event on Saturday. Sorenstam was playing in the anchor match alongside Janice Moodie against Americans Pat Hurst and Kelly Robbins. On the 13th hole of their closely contested match, Sorenstam chipped in for birdie from just off the green, bringing the match back to a tie — or so she thought.

The Americans deemed Sorenstam to have played out of turn because it was Robbins who was actually away. Sorenstam was required to replay her shot. Somewhat predictably, Sorenstam did not chip in the second time around, and she and Moodie eventually lost the match 2 and 1.

“When people ask me what I wanted to be known for, I always said sportsmanship,” Sorenstam told ESPN. “When that happened, that was no sportsmanship at all, and that made me upset. It wasn’t about losing the hole or the match. It was more the principle that somebody could do something like that.”

Legendary LPGA player and current CBS Sports broadcaster Dottie Pepper made some serious waves while working for Golf Channel during the 2007 Solheim Cup at Halmstad Golf Club in Sweden when, believing she was in the midst of a commercial break, Pepper called the U.S. players “choking, freaking dogs” when they failed to close out a match. Unfortunately for Pepper, her mic — and the broadcast — was still live.

Pepper apologized, and while players were reportedly upset, any lingering ill will was effectively squashed when Pepper served as an assistant captain to Meg Mallon at the 2013 Solheim Cup at Colorado Golf Club.

At the 2013 Solheim Cup at Colorado Golf Club, Michelle Wie West took some heat for draining her putt and heading to the 17th tee before her opponents, Caroline Hedwall and Caroline Masson, had finished out on the 16th green. Compared to the controversies described above, it was a somewhat minor infraction, but Wie West is one of the women’s game’s biggest stars. She took to Twitter to apologize, writing in a series of three tweets: “Feel absolutely horrible about running off the green on 16. Got caught up in the moment and was so tired that I forgot what was happening. But that is no excuse for my behavior. Truly sorry. [Partner Jessica] Korda did indeed stay by the green to watch them finish out the hole.”

If Wie West was frustrated, it would be easy to understand why. She and Korda lost 2 and 1, and Team USA got skunked in the afternoon fourball session, losing all four matches to trail the Europeans by five points heading into Sunday singles. The Europeans eventually prevailed by a demoralizing score of 18-10.

What fresh drama will this year’s edition of the Solheim Cup bring? We can’t wait to find out.