Rules Guy: Can you still post your score if you play a hole from a different set of tees? 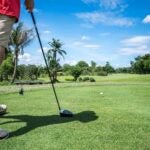 What do the rules say about playing from a different tee on a given hole?

I generally play from a set of tees one-up from the back. If there is a particular hole with an impressive tee box from the tips, however, can I move back and play from there just for that hole? Also, if it’s match play and my opponent agrees to do the same, is that okay? And would my round still be legitimate for handicap purposes?
—Andy Wiegert, St. Louis, MO

Instead of bringing your driver to the tips, Andy, just bring a camera.

Rule 6.1b requires you to play from within the teeing area; which set of tee markers is for your teeing area is specified by the Committee. You as a player don’t have the right to overrule the Committee willy-nilly, or in any other manner.

In a stroke-play competition, you’d get two penalty strokes for playing from outside the teeing area and would need to correct the mistake before starting another hole or be disqualified.

In a match, technically you and your opponent wouldn’t be penalized for agreeing to play the wrong teeing area so long as you didn’t know you’re not allowed to make that switch by agreement. (Now that you’ve read that sentence, that’s no longer possible; agree to ignore a rule and you’re both disqualified under Rule 1.3b.)

As for posting a score, if a Course Rating and Slope Rating doesn’t exist for a particular combination of tee sets being played (i.e., “Black/Blue,” “Blue/White,” etc. — something more courses are doing), a temporary Course Rating and Slope Rating would need to approved and issued by the local Allied Golf Association for the score to be acceptable.