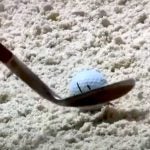 Abraham Ancer's Masters has begun with a 75 and a penalty ruling.

AUGUSTA, Ga. — A drama-filled day at Augusta National spilled into the evening when the tournament announced a rules violation.

Abraham Ancer inadvertently brushed the sand behind his ball in the greenside bunker on the 15th hole, resulting in a two-stroke penalty.

“After Mr. Ancer had signed his scorecard and exited the scoring area, video evidence was reviewed by the Committee regarding a potential breach of Rule 12.2b(1), which states that touching sand in a bunker right behind the ball results in a penalty,” read the announcement from Augusta National’s competition committee, released just before 8 p.m. ET.

“The touching of the sand was deemed visible to the naked eye. Had this not been the case, the video evidence would have been disregarded and a penalty would not have been applied.”

Ancer’s bogey 6 became a triple-bogey 8 and his one-over 73 a three-over 75. “I was just informed that I have been assessed a 2 stroke penalty for unintentionally grazing the sand in my backswing on hole 15,” Ancer wrote in a tweet Thursday evening. “While I’m gutted, I can’t wait to get after it tomorrow.”

While the amount of sand he moved was slight, the letter of the law is strict in golf, and Ancer, who played in the final grouping at the 2020 Masters alongside Dustin Johnson, seemed willing to accept the penalty.

Video reviews are rare on the PGA Tour but they do happen. The USGA’s protocols for video review, which were revised in 2017, state that:

…the Committee will assign one or more of its officials to monitor the video broadcast. This monitoring role will include both:

• A proactive review to identify and help resolve potential Rules issues as they arise, and
• A responsive review when needed, such as to help referees on the course who ask for information on a real-time basis and to help the Committee when it is assessing issues based on something that happened at an earlier time.

This video monitoring should result in prompt identification and resolution of almost all Rules issues that can be seen in a video broadcast. It should also help minimize the number of times an issue arises that has not been seen and needs to be addressed at a later time.

At the American Express earlier this year, Mathew Wolff was penalized a day after committing a rules infraction. After reviewing video of Wolff addressing his ball on the 1st hole, the Tour determined that Wolff had caused his ball to move before he struck it. Wolff was penalized one stroke.

At the 2021 Players Championship, Viktor Hovland benefited from a video replay — albeit not through official channels — when he was preparing to take a drop on the 11th hole. After someone from the PGA Tour’s streaming service noticed that Hovland was dropping in the wrong spot, Hovland was notified and moved to the correct drop area.