Driver was the worst part of my golf game. These 3 fixes have me feeling more confident than ever.

The author and his GOLFTEC coach succeed in gaining distance and accuracy with the driver.

Are you lacking confidence on the tee box? I was too. For years, I hit what my friends dubbed a “boomerang” — a wicked, arcing slice that made doglegs difficult and forced carries impossible. Now, I feel like an entirely different player, and that’s thanks to three key swing fixes:

After just a handful of sessions at my local GOLFTEC in Englewood, New Jersey, my swing was looking a lot better. But more importantly, my swing IQ had skyrocketed.

My GOLFTEC coach Nick Schiavo made sure I understood not only what I needed to do better, but why I needed to do it. The result was a major confidence boost with a driver in my hand — an excitement to show off what I can do, rather than fearing the bad (and I mean really bad) outcomes that were possible.

Are you maximizing power in your golf swing? If you’re a mid-handicapper like me, the answer is probably not.

I didn’t really understand what ‘taking a turn’ meant in the backswing, so instead of rotating my hips, I was just swaying them back and forth.

After identifying the issue, turning my hip sway into hip rotation has been a relatively easy, if time-consuming process. Nick helped me find a more athletic posture by narrowing my stance and sticking my butt out further. He gave me a drill to do at home, where I kept my rear end on the wall behind me and rotated my lower body correctly through the swing.

Now my body doesn’t slide away from my target during the backswing. Instead, I transfer the weight into my back leg, keeping my right knee in place. On the way down, I transfer that weight forward and fire my hips through the ball at impact. In other words, my swing looks like a real golf swing!

The other key to unlocking power wasn’t where I expected it at all. Nick identified that I had a very strong grip (a common theme among former baseball players), and I kept my wrists completely locked. This was a huge mistake that had cost me ball speed and distance my whole life.

By using the proper wrist hinge in your swing, you too can gain power you might not know you had! I learned quickly that by loosening my grip and activating my wrists at the top of my backswing, I could create more clubhead speed on the way down. It’s important to get the timing right, my GOLFTEC instructor helped me understand how to do this most effectively.

I always knew I had to find a consistent way to address the ball, but because my old swing was so bad, I was always trying to tweak on the fly. It was all a perfect storm to feel no confidence with a driver in my hand.

The first step Nick and I took was to address the ball the exact same way, every time I got to the tee box. Establishing a routine made me feel more comfortable, not to mention more consistent.

Nick had me grip my driver and had me slowly bend into my new, athletic posture until the clubhead was right behind the ball. We also decided I should tee the ball lower for more consistent strike on the face, and not worry about trying to hover the clubhead at address (which eliminated the 100-yard popup from my game).

We decided it was best for me to keep my lead arm as straight as possible throughout the swing, so it felt like my left arm was locked at address. Since I’d struggled with my launch angle, Nick had me lower my right shoulder slightly when addressing the ball. This led to my driver catching the ball at a much better angle and my ball flight soaring.

This may seem like a long list of changes, but coming up with a repeatable way to address the ball didn’t take more than 30 minutes of my time at GOLFTEC, and now it’s become second nature!

Fix 3: Forgiveness over everything

There’s no club fitting process that’s as fun as a driver fitting. Grip, rip, and watch your numbers soar in the simulator.

If you too have been holding on to your trusty driver of many years (I was playing with a 2013 Callaway X-Hot), trust me when I tell you: now is the time to make the change. This year, club manufacturers have made great strides in technology compared to previous models, not to mention that we’re just months away from the drop of next year’s new tech.

In my GOLFTEC driver fitting, I got to try the TaylorMade Stealth, PING G425, and Callaway Rogue ST Max. It was evident how much my outdated driver was holding me back, because I instantly saw 20-30-yard distance increases off the tee.

Nick and I went over the specs of each trial round to make the best decision for my game. Still lacking a consistent strike on the sweet spot, we went with the Rogue ST Max. It’s considered to be one of the most forgiving drivers on the market, meaning that players will see increased performance even on off-center hits.

Now, when playing with family and friends, not only do I enjoy showing off the new driver, but also my new swing. (The hundreds of additional fairways that have come with it haven’t been too bad, either!) 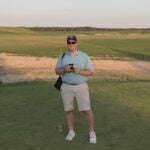 Connor Federico is a video producer and editor at GOLF.com. As a Long Island native, he shares a love for golf with his father, brother, and friends, but a passion for visual storytelling all his own. If you have comments about his work, or know about something you think the golf world needs to see, you can contact him at connor.federico@golf.com.