After years of inconsistent ball-striking, a 10 handicap went for his first-ever lessons at GOLFTEC to address the issues.

Before summer and golf season kicked into gear on Long Island, I frequented GOLFTEC to whip my game into shape. Frankly, I went in not knowing what caused the ball-striking issues I was having on the course. It was a guessing game.

For years, I put off taking lessons. I always knew I needed them, but I feared an instructor breaking down my swing to something entirely different and leaving me with a million swing thoughts would leave me even worse off. Even if it was ultimately best for my golf swing, the idea of change could be scary.

But nothing was scarier than standing over the ball with an iron in my hands and having no idea where it would go. My ball-striking was a mess. Fat, thin, flush, chunk, blade — you name it.

I teamed up with instructor Dan Benzenberg, and it didn’t take long to identify my flaws after my swing evaluation. What I appreciated most about Dan’s approach is that he didn’t tear me down for the sake of it. We pinpointed three main issues and got to work by knocking out one bad habit at a time. This approach allowed me to focus on one swing thought and how each area we addressed benefitted my ball-striking goals.

The first and most alarming issue in my swing was the amount of sway in my body. I never realized how bad these movements were or that I was moving to this degree. My hips, shoulder and head would move upwards of a foot in my backswing. The biggest challenge I faced in my golf swing was getting all those moving parts back to where they needed to be at impact.

Sometimes I would be where I needed to be, and sometimes I wouldn’t. That was a big reason why my ball-striking was so inconsistent. I needed to work on keeping my head still and my hips turning instead of swaying in my backswing. Keep in mind this is something I have done for nearly 20 years. The change didn’t come quickly or easily. Dan and I spent session after session focusing on my head, my hips and my turn until the bad habits began to break.

My initial impact position would be described as a flip. Rather than hitting down and through the ball, my hands were already flipping over before impact. I was skimming the ground on each swing at best. This was causing me to lose distance and suffer inconsistent ball-striking.

A plan was put into place to hit hundreds and hundreds of punch shots to get used to the feel of having my hands more in front at impact and hit down through the ball. Dan would often have me exaggerate these movements and swings to really emphasize the point.

To this day, I start range sessions with exaggerated punch shots to remind myself of the feeling to get my impact position where it needs to be.

You can get 20% off your own lesson at GOLFTEC right here, or below. 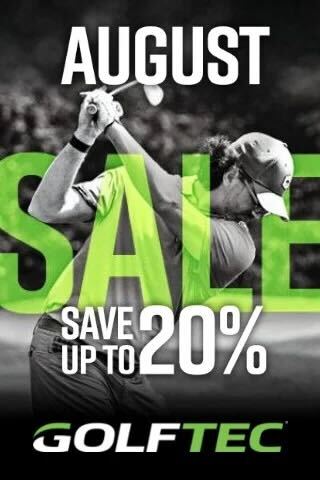 Fill out this form to book a swing evaluation or club fitting! A local GOLFTEC Coach will contact you to discuss your game and goals.
Book Now

Just as I never knew how much my body swayed or that I “flipped” at impact, I didn’t realize how off my alignment was. For starters, I needed to reassess where I put the ball in my stance with every club in my bag. My wedges weren’t far enough back, and my long irons weren’t far enough forward.

On top of that, my hand position at address may have been assisting my bad flipping habit. My hands were too far back and I set myself up to flip from the start.

Last but not least, my shoulders were closed. This caused me to aim to the left on every swing. I needed to pull my right shoulder back at address to help improve my swing path.

None of these were easy changes for me to make. I still fight with them today. But now I know what my swing flaws are and how to address them. My ball-striking consistency has improved immensely, and so has my golf-swing IQ.

My only regret is waiting this long to start lessons.