What should you do when you’re in a slump? Follow Brooks Koepka’s lead 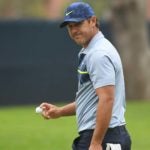 Every golfer will face a slump at one point or another in their golf career, but how you react to it is vital.

I love a good comeback story. I’m not sure why, but it’s probably because I’m attracted to stories of grace and retribution. It was for that very reason, and the fact that golf is just downright hard (and slumps are real), that I was overjoyed to see both Jordan Spieth and Brooks Koepka play well at the Waste Management Phoenix Open.

Both Koepka and Spieth are massively talented individuals and they have both occupied the No. 1 spot in the World Golf Ranking in their careers — a pinnacle that has only been reached by 24 men. But golf is a fickle sport, and even the most physically gifted golfers suffer slumps and periods of poor form. As I scrolled down the list of previous No. 1-ranked golfers, I could not find one who had not suffered at least one slump in form during their careers.

If you are struggling with the game just remember you are not alone. Even the best players in the world have periods of struggle.

It’s all but guaranteed that everyone who has played golf for any extended period of time will have to navigate a slump. When you are suffering through the doldrums it sometimes feels like you will never play well again, but that is the furthest thing from the truth.

Koepka shared a couple of post-tournament tips to finding the light at the end of the tunnel.  Consider this nugget:

“There was a period maybe for about two months where I just questioned whether I was ever going to be the same, whether I was even going to be somewhat remotely the same golfer that I ever was.  My knee, no matter how much work and pain I was doing with Derek [Samuel], my trainer, it just felt like it wasn’t progressing. And that’s the frustrating part, when you feel like it’s not going anywhere. But we stuck with it. Those dark places, a lot of tears, questioning yourself, and in dark places mentally. You’ve got to come out of that.”

I want to highlight two of Koepka’s observations:

When things go awry, the first thing golfers tend to do is panic and make rash decisions. Not so with both Koepka and Spieth, who both appeared resolute and focused throughout their struggles.

Aside from Spieth eventually making a trip to see Butch Harmon, and Koepka parting with Claude Harmon, they both remained consistent and steadfast throughout the trials. I highly advocate the same approach.

Be wary of snap decisions and strive to focus on the cure and not the fault.  It is human nature to do the opposite, but in my opinion this approach can easily proliferate into a negative mindset and a confused and inconsistent approach. Consistency of mindset is crucial if you are striving for consistency in performance.

Further, be watchful of dark places and train your mind to look for the light at the end of the tunnel. There will always be a light. Sometimes if may be faint, but to get out of the tunnel, you have to move toward the light. I’m certain you would not ignore said light and keep going around in circles until a bigger light comes along. Sadly, I find too many golfers tend that way when they are slumping.

When something positive happens, even something small, consider it, bank it in your memory and use it as the cornerstone on which you build your comeback. That something small could be a difficult shot pulled off or a challenging save made. It doesn’t matter what it is, just know it could be the genesis of the momentum shifting.

The comeback may happen quickly, or it may happen slowly. Either way you have to, as Koepka said, come out of the dark places mentally before you have a physical metamorphosis.