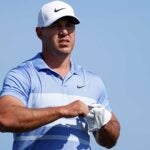 Brooks Koepka's final round was a quiet one until he shot five under on his final six holes to win.

What began as Sunday clash between Xander Schauffele and Jordan Spieth ended in an all-out sweepstakes for the entire leaderboard at the Waste Management Phoenix Open. Thanks to a thrilling chip-in on the 17th, Brooks Koepka was the last man standing.

Perhaps it has something to do with the setup of the golf course, and the fact that both Spieth and Schauffele struggled to get going, but at 2:56 local time and the leaders thru 14, nine players were within one shot of the lead. Nine! The suspended belief remained all the way until Koepka’s ridiculous chip-in. At that moment, this thing was basically over.

Koepka’s chip-in came from a tricky angle short and right of the hole, with a ridge he was forced to carry. He nipped it perfectly and it ran straight into the flag for a two-shot lead at 19 under par.

“I worked hard with Pete Cowen over the last few years being able to chip like that,” Koepka said afterward.

The 5,000 or so fans who were allowed to attend the event roared. Koepka follow it with a 359-yard drive into the 18th fairway, a casual approach and a two-putt for par. His best remaining competition was Schauffele, one hole behind, flying his tee shot on the 17th hooking hard into the water.

Even though he was the No. 13 ranked player in the world, the win — the eighth in his career — is surely one of the most unlikely. He had just missed his third straight cut in a row at Torrey Pines and had seen betting odds for his victory balloon to 50-to-1 before the event. “I was in some dark places mentally,” Koepka admitted. Starting five back on Sunday, his chances looked just as bleak, but no one in the field took it from him.

James Hahn raced out to 18 under with eight holes to play but made four bogeys down the stretch. Scottie Scheffler entered the conversation after a birdie on 15, reaching 17 under, but promptly bogeyed 16. Spieth even flirted with relevancy on a poor day of putting, but he found the water left on 17.

The final contestant in the Can He Catch Brooks affair was Kyoung-Hoon Lee, whose birdie try from 33 feet bent left of the hole and kept him one stroke shy of a playoff. Koepka will now move up to no. 12 in the world ranking.