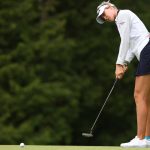 Nelly Korda recently switched to a left hand low putting technique, and the results thus far have been excellent.

JOHNS CREEK, Ga. — Three weeks ago, Nelly Korda had the worst showing of her U.S. Women’s Open career. She missed the cut in the event for the second consecutive time, and with a two-day total of 11-over 153, posted the highest 36-hole score of her career in women’s golf’s biggest event.

The next week, she made a change.

Heading into the Meijer LPGA Classic, Korda opted to make the change to a left hand low (cross-handed) putting technique. She’d used left hand low in the past, but any change with the putting stroke can feel drastic.

“It’s hard, switching from conventional to left hand low,” Korda said after her opening-round 70 at the KPMG Women’s PGA Championship. “It’s a hard change, especially in tournaments under pressure. You’ve really got to commit to it. So it’s a big change.”

The change might be a difficult one for mere mortals, but Korda made it look anything but as she took last week’s title in Grand Rapid, Mich. after a blistering 25-under showing over four days at Blythefield Country Club. The cup looked especially large for the 22-year-old during the third round as she shot an 11-birdie 62 to put a stranglehold on the tournament.

“I just feel like my putting is better left hand low,” she said mater-of-factly after her round.

Korda’s pure putting stroke traveled south with to Atlanta Athletic Club this week. Fresh off her fifth LPGA Tour victory last week, she opened the Women’s PGA Championship in that same form, sitting inside the top 10 after the morning wave.

After the round, she explained more specifically why left hand low sets her up for success.

“I just feel like left hand low, my shoulders are way more square,” Korda said. “I feel like, when I was conventional, I really lifted my left shoulder higher, and when I was under pressure, I feel like I stopped using my shoulders as much. So for me, it’s more just posture.”

A left-hand low technique — like any change in your game — will feel awkward at first, but Korda highlighted one of the style’s many benefits. With more level shoulders, it’s easier to maintain proper alignment and posture. Keeping that front shoulder down also keeps you from making an ascending blow on the ball, which gets the ball rolling end over end quicker.

Korda will look to keep things rolling in the right direction on Friday.