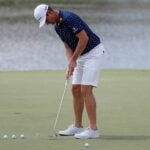 Justin Rose has two favorite putting drills he uses when prepping for a round.

One of the most important keys to success on any course is familiarizing yourself with the greens, and this is especially true when you’re playing somewhere for the first time. Tour players have to acclimate to new putting surfaces on a weekly basis, so they know a thing or two about how best to do it.

According to former World No. 1 Justin Rose, there are two drills he utilizes when preparing for his rounds: “The Timeline” and “The Hurricane.” The best part? They’re simple enough for anyone to try. Here’s how they work, explained by Rose himself.

“This drill is great for tying in speed, and it’s one of the first things I’ll do when I go to a new venue,” Rose said during a phone interview on behalf of his apparel sponsor, Bonobos. “I’ll hit putts, and the goal is to kind of keep my head down and my eyes dead still until I look up and the ball makes its last revolution. So you’re kind of tying in the feel of where the ball should be with your awareness, and as you look up, it makes its last sort of six-inch revolution. And that really helps kind of get you into the speed of the greens for that week.”

“The Hurricane is another favorite drill of mine,” Rose said. “I kind of spiral out from the hole, so it looks like the eye of a storm, spiraling, but you still have three feet, four feet, five feet, six feet, seven feet, eight feet. So every putt is different. It’s a different distance, on a different break, so you’re never hitting the same putt twice.”

According to Rose, practicing a variety of putts with regard to break and distance is the key to becoming familiar with a putting surface. One thing Rose says he no longer spends much time doing is practicing straight putts using a chalk line.

“I used to get hung up on being on a chalk line for hours,” Rose said. “My mentality now is you’re not really learning much if you’re hitting the same putt over and over and over again.”

Sick of losing golf balls? Here are 5 tips to never lose one again

Women's Fitness Tips: 3 Reasons you need to add squats to your workout routine