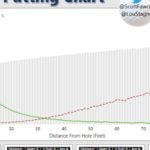 Lou Stagner charted out the likelihood of three-putting from every distance.

Three-putting is never fun, but even for the best in the world, it happens from time to time. Steve Stricker leads the PGA Tour in three-putt avoidance this season, but he has still carded six three-putts over 540 total holes — and he’s one of the best putters in the world. No matter how pure you are on the greens, remember that three-putting is an inevitability.

To further reinforce that point, Lou Stagner, one of the mind’s behind the data-driven Decade Golf system, recently posted a chart on Twitter that shows the three-putt percentages for PGA Tour pros from every distance, and the results are pretty fascinating. You can check it out for yourself below.

Some of the takeaways are obvious, such as the fact that the farther away from the hole you get, the more likely you are to three-putt. But there are some things that were more surprising, such as at what distance it becomes more likely that you three-putt than one-putt. According to the chart, this occurs at 33 feet from the hole. For many amateurs, an approach to 33 feet should be chalked up as a win, however at this distance it’s still more likely that they walk away with a bogey than a birdie.

It’s also notable how quickly the one-putt percentages drop off between three and 10 feet. For every foot you get farther from the hole, your chances of a make decrease anywhere from 5 to 11 percent.

And once you get outside the 25-foot range, there is a less than 10 percent chance that you hole the putt. So really unless you knock it relatively close to the pin, your goal should get getting down in two rather than jarring your first putt.