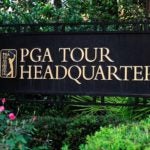 “The growth in consumption and fan engagement we have seen over the last year in our DraftKings Daily Fantasy games has been tremendous,” said Norb Gambuzza, the PGA Tour’s senior VP of media and gaming. “The expansion of the relationship to now include sports betting is a natural evolution and one which fully supports and promotes the PGA Tour’s objectives of reaching and engaging new segments of fans while introducing them to our players, tournaments and media platforms.”

According to the release, DraftKings has had a rise in golf bets made on its site since the PGA Tour returned in June. Pro golf is DraftKings’ fourth-most popular sport to wager on.

“Golf has been an especially important outlet for fan engagement over these past few months, and this latest collaboration is a significant next step for both the golf and gaming industries,” said Ezra Kucharz, the chief business officer of DraftKings.

How much damage frost really causes a golf course (and your yard), according to a golf-course superintendent