This easy-to-fix mental mistake might be hurting your putting 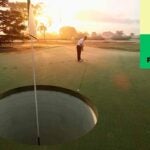 Days before he would tee off in his first Masters, 23 -year-old newly-crowned PGA Championship winner Collin Morikawa sat down for his pre-tournament press conference and was probed about his expectations coming into the week:

“I love the word expectations,” Morikawa said, sarcastically, shirking the question. “I’m going to come out one day with a shirt that says ‘expectations’ crossed out. For me, it’s about goals.”

It was a telling moment about how a top-tier professional golfer thinks about something that golfers of all levels have a strange relationship with: Expectations.

It’s easy to see how golfers can get their expectations out of whack so easily. When you’re 8 feet away from the hole and trying to save par, you’re not thinking that the best putter from this distance on the PGA Tour last season misses this putt about 25 percent of the time. When you see a fairway, you forget that the average PGA Tour player misses it about 40 percent of the time. You’re thinking that you need to make this putt, and hit this fairway.

It’s that inherent level of optimism — the possibility of what might happen — that keeps so many golfers hooked on golf. But that well-meaning mindset could also be holding you back.

Researcher Gal Ziv, who has previously studied the “quiet eye” technique in putting, was a recent guest on my friend Cordie Walker’s Golf Science Lab podcast, which you can listen to in full below. In it he talks about his new set of research into a simple question: Can lowering your expectations help you improve your game?

In his study, Ziv divided a group of golfers into two groups and had them hit short putts. For each group, he drew a circle around their respective holes. The first group had a smaller ~3 inch circle; the second group putted to a hole with a larger ~5.5 circle around it. The goal for each group was simple: Putt your ball to inside the circle.

As you might expect, those putting to the larger circle obviously had more immediate success in achieving their relatively easier goal. But that wasn’t the point of the study. The point of study was to see how well those skills transferred over time. So, a few days later, the golfers were brought back, and the group of golfers who putted to larger circles retained more of their skills — and performed better — than the smaller-circle group.

The study is obviously not a definitive one, but it’s an interesting line of enquiry into the idea that managing (AKA, lowering) your expectations may actually help golfers improve long-term.

Why? Because it helps remind golfers what they can do, rather than what they can’t. He keeps them focused on an achievable goal, and boosts their confidence as a result.

Something fun to think about, and perhaps try for yourself.