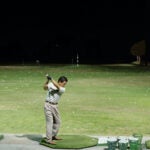 Practicing with feedback is the key to practicing smart.

What’s the difference between good practice and bad practice?

It’s a subject close to my heart. I was always a driving range rat growing up. I’d often forgo the golf course to spend an afternoon grinding on the range. I’d spend hours upon hours hitting golf balls, thinking about my swing, improving my technique. I came out of that process with a good swing but lacking the ability to get the ball in the hole. I lost count of the number of times people asked my why I didn’t score better, or how many times I headed back to the range, wondering why I wasn’t beating the guys I was outworking. Why did it always feel like I was leaving something on the table?

Looking back, I realized that I fell into the same trap that GOLF Top 100 Teacher Justin Parsons says makes the driving range such a “dangerous” place for golfers. I was pouring in the hours, but they weren’t the right hours. It was quantity over quality. And knowing what I know now, it’s that fewer hours of smart practicing will always beat more hours of stupid practice.

That’s great news for the rest of us, who don’t have countless hours to practice, and all of which is a long-winded way of arriving back at the topic for today’s column: What’s the best way to keep people focused on a task, and performing it well?

Goals are good, feedback is better

A recently published study from The University of Texas at Arlington looked into exactly this.

Researchers “gave individuals a simple but attention-demanding task and asked them to perform it for 30 minutes” on different groups. In order to keep participants motivated throughout this 30-minute task, they tested a variety of different motivation tactics: Everything from setting goals, to cash bonuses, to releasing them early from the task if they performed it well.

And what did they find?

That cash bonuses were a surprisingly underwhelming way of keeping people’s attention focused on the task. Goal-setting worked well, but those who performed the best were the participants who were given constant feedback throughout the task as they were performing it.

“Sustaining one’s attention is notoriously difficult. The longer that an individual performs a task, the worse their performance tends to be,” said Matthew Robison, UT-Arlington assistant professor of psychology and first author of the study. “If you want to encourage people to maintain focus on a task … giving feedback about their performance is a very powerful motivator.”

It’s easy to see how this relates to practicing golf: If you want to practice in a way you’ll actually improve, you need to practice with feedback. That means knowing you’re doing something right — or wrong — the moment you do it.

There’s lots of ways you can add more feedback into your practice sessions: