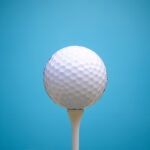 The secret is in the dirt, Ben Hogan once famously said. The only problem is that millions of golfers have spent countless hours digging but haven’t turned up any treasure. At least not yet.

In golf, “practicing” is synonymous with “going to the driving range,” and by extension, the literal act of hitting golf balls. If you want to improve, that’s something you just have to do. Get your hands dirty, put in the hours, and get digging.

But recently, a growing number of voices in golf are beginning to question that notion — that hitting a golf ball is, indeed, the best and only way to practice. Could the secret to golf lie not just in the dirt, but also in the air around us?

Measuring the positive effects of visualization in sports is nothing new, but as research into its benefits has grown steadily more specific in recent years, we’re starting get a firmer grasp on just how amazing visualization can be for practicing athletes.

One of the most well-known studies in the issue came in the 1980s, when a group of researchers from the University of Chicago conducted a study where they split a group of equally-skilled basketball players into three groups: The first group didn’t touch a basketball for an entire month. The second group practiced free throws for one hour every day for a month. The third group would rehearse the motions without a ball and would practice visualizing themselves making free throws for an hour each day during the same timespan.

At the end of the study, researchers found that the second and third group both improved by the same amount. Whether they practiced with a real ball or a pretend one made no difference: Each group ended up making about 25 percent more free throws each.

In late 2019, we were treated to a golf-specific version exploring a similar topic. Academics from the University of Limerick in Ireland measured a group of 44 avid golfers through a series of 40 putts. Half the golfers were shown a video of skilled golfers performing the same challenge ahead of time and given cues to imagine themselves completing the same task. That group eventually outperformed the group who undertook the task after a more traditional warm-up.

“An individual’s ability to imagine the feel of an action without actually performing it may have an important role in determining the effectiveness of the exercise,” Niall Ramsbottom, a researcher on the project, says. “The findings suggest that simply viewing a video of another performing an action may bolster one’s ability to imagine and subsequently perform that action.”

How could it be that the ball being involved — literally the centerpoint of the game you’re playing — is such an incidental part of overall improvement?

The answer has two parts: It helps you avoid bad feedback, and you can practice good technique.

When golfers hit a ball, they get an immediate slate of feedback: Did they hit it well or poorly? High or low? Left or right? Feedback, generally speaking, is an important part of practicing. It allows golfers to spot what they’re doing right and wrong the moment after they do it.

Generally speaking, getting feedback is beneficial, but sometimes too much feedback can be a bad thing, because hitting the ball poorly can often cause golfers to begin make short-term adjustments to the detriment of their long term improvement. Swinging slower, for instance, or making a short-term swing fix.

Dr. Sasho Mackenzie is one of the most innovative and influential golf biomechanists in the game, and the co-creator of the Stack System, a training aid that uses a series of weights, a shorter club, and a radar to train for higher swing speed. Not hitting a golf ball is an intentional part of the design, he says, because it focuses golfers on the task at hand: Swinging for more speed.

“The biggest benefit is removing the abundance of negative feedback that occurs when hitting balls with maximum effort,” he says. “With only the clubhead speed on the radar and how our swing felt as sources of feedback, we are free to learn movement patterns that generate max speed and train uninhibited at those speeds. We can then make small calibrations to transfer the speed to hitting a ball.”

Another benefit of removing the golf ball from the equation — and all the feedback that goes along with it — is that it allows you to focus more intentionally on your technique. Rather than hitting golf balls and potentially engrain poor form, swinging without a ball, and often in slow motion, can engrain the movements you actually want to make.

Lucas Wald, a GOLF Teacher to Watch and PGA Tour coach, makes slow motion training without a golf ball a key part of his lessons to students. He has his students practice a backswing-to-downswing transition drill he calls “the dance move,” and after that, swing in slow motion before building speed.

“Training slowly and precisely gives you time to think,” he says. “You have to slow down to go fast.”

Practicing your golf swing in slow motion is a technique that one of the tour’s best ball-strikers, Will Zalatoris, has been using his entire life — something he says his dad drilled into him growing up.

“Whenever I’m working on something I rarely ever do it full speed. A lot of slow motion work,” he says. “It’s something my dad really drilled into me growing up. It helps me with my body awareness and matching stuff up.”

Max Homa is another believer.

“Almost every day I’ll stand in front of a mirror, before I get to the course, and check my posture,” he says. “There can be some real benefits for amateur golfers doing that, who may not be able to make it to the course as often.”

The aim of the game is, of course, to hit the ball better, and no teacher in their right mind would say you should only practice by not hitting golf balls. But the next time you find yourself with a few minutes to spare, try picking up a club and swinging, free of any baggage the golf ball brings. You may be doing more good for your game than you think.