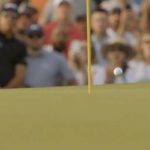 Phil Mickelson's par-saving chip on the 18th green Saturday at the 2021 PGA Championship.

KIAWAH ISLAND, S.C. — Perhaps the shot of the day in the third round of the 2021 PGA Championship was Phil Mickelson’s up-and-down on the 18th hole at Kiawah Island. His lead, once as big as five shots, was down to one, with Phil needing to get up-and-down from a short-sided position long left on the 18th hole to preserve it.

So, Phil, who has been so good at controlling is wedges all week, opened the clubface, leaned the shaft forward, and swept the ball off the turf with a “shallow” swing. As GOLF Top 100 Teacher Martin Hall explains, it sent the ball high and landed soft, with no spin as it rolled gently toward the hole. He made the putt to maintain his one-shot lead.

“I felt I had a very clear picture on every shot,” he said after his round, “and I was executing. I just need to keep that picture a few more times.”

And now, thanks to this stunning footage shared by the PGA of America, we can relive the clutch shot in ultra-slow motion — with the music providing a touch of drama along the way.