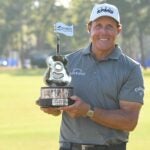 Phil Mickelson won for the third time in four starts on the Champions Tour last weekend.

Phil Mickelson has played four Champions Tour events since turning 50 last year and so far, he’s taken home three trophies. Since reaching the half-century mark, Lefty also notched major win No. 6 against the young’uns, so it’s reasonable to assume that he’s dominant on the Champions Tour merely because of a talent gap. However, as Mickelson explained after his win at the Constellation Furyk & Friends last week, the larger margin for error on the senior circuit has also keyed his success.

“I’m enjoying the golf courses, how I can be a little bit more aggressive,” he said after his final-round 68. “Like when I made a [double bogey] on No. 5, I can still recover. You do that on the regular tour, you just get eaten alive, you just can’t make those mistakes there and have a chance to compete and contend and win.”

Mickelson has always been a feast-or-famine player, so the ability to fire at pins and ratchet up the aggressiveness on the Champions Tour plays to his strengths masterfully.

“I like how you don’t have to be perfect, and I can get away with a shot or two here or there,” Mickelson said. “It makes it fun to play and play aggressive.”

World No. 1 Nelly Korda is not the most expressive player on the course, but as she explained at last week’s Founder’s Cup, that calm outer demeanor doesn’t always reflect how she feels on the inside.

“My face is pretty calm but not inside,” Korda said. “I’m definitely feeling all the emotions inside.”

While some players use their emotions as a fire that catapults their games to the next level, Korda prefers a more even-keeled approach. The cliché “one shot at a time” plays a huge role in achieving that attitude — something Korda said she’s tried to do since a young age — but she also said another major winner has served as a model for that on-course behavior.

“I’ve always looked up to Roger Federer and he’s always had one emotion in a sense,” she said. “He’s always been really calm on the court, so I kind of tried to take that to golf as well.”

Want to overhaul your golf bag? Find a fitting location near you at GOLF’s affiliate company True Spec Golf.