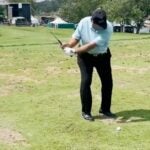 Lee Trevino shows how to hit a pitch shot, during a video shared by the Champions Tour.

Lee Trevino, one of the best shot makers in the history of golf, showed one of the worst ways to hit one of the shortest shots. Trevino took his club back, then, in a quick, exaggerated motion, only flipped his arms forward.

“Everybody wants to do this,” he said, a man and a small gallery watching and listening. “No, no.”

In honor of the six-time major champion’s 82nd birthday this week, the Champions Tour shared a two-minute video of Trevino breaking down a pitch shot. A Google search of “Lee Trevino” and “tips” is a deep and fruitful well, and this recent illustration is one of his best.

First, the aforementioned man hit a pitch shot of his own, a woman in the background encouragingly told him, “That’s a good shot,” and Trevino put another ball down and began.

“You want to turn the club that way with the body. As soon as you start down, go left with the body,” said Trevino, motioning to the left for the right-handed player. “Let the club go with you, let it go with you. Keep the arms against the body and just go around.

“That’s how you hit a wedge. Keep it going around.”

The man hit another wedge, nodded and he offered a fist-bump to Trevino. A woman in the background said, “Oooh.” Trevino continued. He dropped a ball for himself, played the ball off his back foot and emphasized the body movement again.

“Wedge shots are hit by the body turning. In other words, every shot that you hit with a slow wedge, a small one, is you play the ball back and you learn to go here and you see how the wedge, see how it turns,” said Trevino, demonstrating the left-to-right motion. “Look at the hands. See how they go with you. And this is how you hit this little shot here, see. Because there’s no feed, there’s no nothing. That way, you hold loft and you hold bounce.”

The man hit another wedge.

“As soon as you start down, turn the left hip and the hands have got to follow around to the left,” Trevino said before the man hit.

“That’s how you hit a wedge,” Trevino said.

At the end of the video, the man hit one more, Trevino yelled for it to “go in,” and the crowd shouted, “Ohhh,” when it fell a little short.

“Getting closer,” the man said.