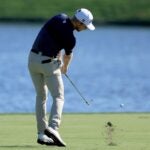 Will Zalatoris has gotten to know Lee Trevino because they both live in Dallas, which has allowed the youngster to learn from the legend.

Will Zalatoris is only 25 years old and relatively new to the scene, but he always seems to carry with him a comfortable confidence. Like he’s been here before.

Zalatoris, for his part, suggests he knows where it comes from: Picking the minds of those around him, and seeing what he can learn.

“I’m a golf junkie,” he said ahead of the first round first round of the Arnold Palmer Invitational. “I’ll try little things here and there that I hear guys trying. I’m always trying to find the next edge.”

Zalatoris says he plays golf five days a week during his off weeks, which he spends in Dallas. Jordan Spieth is one guy he plays with, and learns from, often — “anytime Jordan Spieth’s inside of 100 yards, I’m watching. I want to see how he does things,” he says. Scottie Scheffler is another common playing partner. As is one of the best of all time: Lee Trevino.

“The stuff that he does even now, he’s 80-plus years old, and he still can shape the ball both ways and still get it out there,” he says. “There’s things that I actually do in my game that I actually kind of mimic Trevino to an extent.”

Crossing paths with Trevino over the years has allowed Zalatoris to pick his brain about all manner of things, from the golf swing to the Masters. And that allowed him to walk away with a tip that he still uses anytime he tries to hit a draw or a fade.

Zalatoris said one day he started to talk with Trevino about working the ball: How best to hit a fade or draw on command. Zalatoris asked him some questions, and was surprised at what Trevino had to say.

“When he hits draws, he tends to weaken his right hand, and when he hits fades, he actually weakens his left hand,” Zalatoris explains. What’s surprising about this is that weak grips tend to lead to slices, and vice versa. But Trevino has a good reason for doing it. “His thought on that is you can be as aggressive as you want of getting the ball to shape. You don’t have to feel like you’re holding on to something.”

So, that’s what Zalatoris does now anytime he’s working the ball. It was a surprising solution, but not as surprising as what happened next, Zalatoris explains:

“He starts asking questions about my golf game,” he says. “I’m like why are you asking me questions? I’m 25 years old, you’ve been around the game a helluva lot longer than I’ve been alive.”