Sungjae Im has quickly become one of the most promising players in the game.

Just 22, Sungjae Im qualifies as the best young player fans know the least about. His victory at the Honda Classic before the suspension of play is a testament to his natural ability and rock-solid training at the Korean National Sports Academy outside the capital city of Seoul. As you can imagine, Sungjae’s swing has in part been molded by data: force plate mats, thousands of balls, Trackman numbers and science. It’s not the prettiest motion, but it’s highly functional. My bet is that Sungjae is more interested in creating those magic numbers on Trackman than attaining the artistry and beauty of, say, Adam Scott. Can’t blame him: At the conclusion of the Charles Schwab Challenge in the PGA Tour’s first event back from the Covid-19 break, Sungjae sat second on the money list with $4.04 million.

At the risk of being rude, Sungjae’s body isn’t exactly what you’d expect from a modern Tour player. It’s based on a notion that in order for Asians to compete with Westerners, who are often bigger, they have to bulk up. Indeed, I teach a Korean junior who just shot 13-under and won a junior event by 11 shots, but is continually encouraged by her parents to add weight. It’s like what Bryson DeChambeau has glommed onto: Force equals mass times acceleration. My feeling is that there’s a tipping point. Sungjae’s far from it. He’s a perfectly fine athlete and can hit it a country mile. Check the above to see how you can add some Im power to your game. 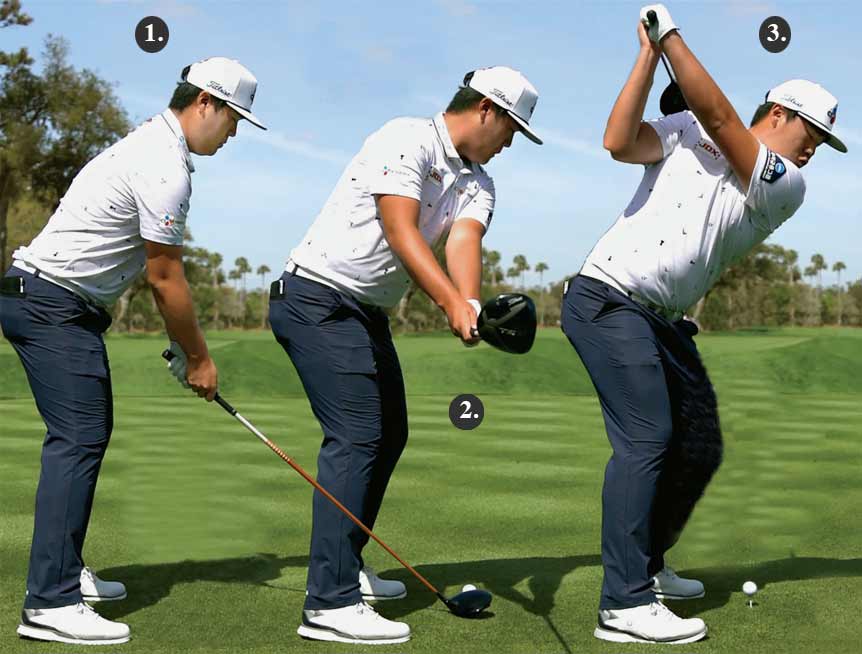 Sungjae’s posture contains the usual suspects of forward bend and a decent grip. However, his weight is a bit over his toes and his spine is slightly in S-posture. I’d hazard a guess that this is his natural spine shape, which contributes to this look — not ideal, but workable.

The club remains outside his hands and not rolled to the inside — a common weekend player mistake. His lead arm is under-rotated, as if he’s double-jointed. Nice, gentle hip bump and turn.

Sungjae’s hands swing over his trail shoulder. Copy this! Notice how his back foot is really pushing into the ground — I’m sure he lights up a lot of pressure plates. Better yet, check his expression — looks like he really wants to smash it. 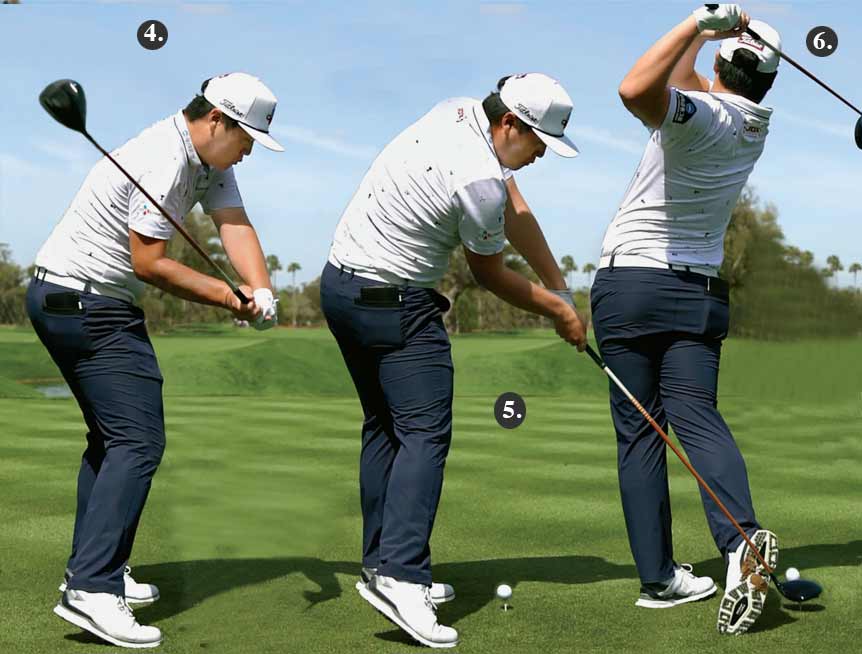 The next three frames are less than .25 of a second, meaning they’re athletic, dynamic and reactionary to some extent. His pressure and mass have shifted to his front foot with his body starting to rotate open and go into that all-important side bend.

He’s really holding up the shaft here, and has redirected the club somewhat. The raise is likely a byproduct of working extensively with launch monitors. The move gives him the numbers he craves.

A high finish after that club redirect you saw in frame 5. He’s nicely balanced with his weight and pressure on his front foot and in balance. Overall, it’s a modern, Trackman-based swing that, obviously, really works.