Jordan Spieth used to ‘freak out’ during bad rounds. Now he does this instead. 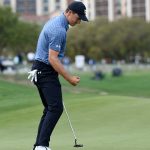 Think about playing what you have, not looking for something you don't.

We all know the feeling in golf when things start to unravel. The dread can build on itself. One thing goes wrong, and then another, and then the next thing, until you’re anticipating bad things which haven’t even happened yet.

The funny thing is that no matter how good you get at golf, it’s a feeling that you can never truly escape. The pros feel it, too. The difference is, they’re better at knowing how to manage it.

And there’s no better living embodiment of that fact on the PGA Tour today than Jordan Spieth.

Spieth captured his first win on four years last Sunday at the Valero Texas Open and is among the favorites at Augusta National this week. For nearly five years, he’s alternated between various swing thoughts and countless second-guesses from analysts. The victory provided some sweet relief for Jordan, but for as easy as it looked for those of us at home, that wasn’t quite the case for Jordan.

‘I didn’t have great control’

As Spieth evidenced on Sunday.

“I really didn’t have great control of the ball this weekend at all,” he said.

The difference, as Spieth went onto explain, is in mentality. Spieth shot a score and won the tournament not firing on all cylinders. Though he may be competing at the highest level, figuring out how to shoot a good score when you’re not playing your best is an eminently relatable problem that we all have to solve. Here’s how Spieth said he did it.

How to play well when you’re not at your best

When the bad shots come it’s easy to lose confidence and go searching for answers in a hurry. It’s something Spieth admitted he’s struggled with in the recent past. But it’s the absolute worst thing you can do.

“[In the past] I would have maybe started to freak out and change swing feels,” he said. “Instead I stuck to my guns and said ‘what I’m doing is the right thing, let’s just try and figure out what we’ve got.'”

“Do we have a shot that we can play? How are we going to step into this next one confidently?” he continued.

As Spieth says, when things go sideways, don’t try to find something you don’t have. Try to figure out what you do have, and how you can play with it. If that means aiming left and hitting a 40 yard slice into the fairway, than that’s what it takes.

All you’re trying to do in these moments is to park the technical swing thoughts to one side and re-establish a feel for playing the game. If you can do that, you won’t need to bring your best stuff to shoot your best score.